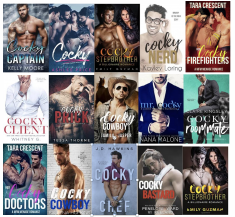 Whoa ho ho — not so cocksure now, are we, Faleena Hopkins?

Last month, we wrote about romance writer and delusional word-copyrighter Faleena Hopkins, creator of the Cocker Brothers series of books, and her federal lawsuit against fellow romance writer Tara Crescent, author of the series Cocktales: The Cocky Collective. Yes. Those are book series that exist, and over which a legal battle was fought. You’re welcome.

Today, we can report that Hopkins has lost her suit. This news should be unsurprising, though everything has been terrible for so long that good news seems luxuriously indecent.

To refresh your memory, Hopkins had, ahem, overconfidently attempted to trademark the word “cocky” in book titles, threatening legal action against several of the eleventy billion other romance authors who’d made use of it. The amazing Alison Flood over at the Guardian brought us the original story, and she’s back with this great update, which you should check out if for no other reason than that it’s accompanied by a picture of a(nother) giant rooster. Flood writes:

The Authors Guild and Romance Writers of America joined forces to provide Crescent with legal assistance and “defend the principle that no one should be able to own exclusive rights to use a common word” in book titles. They argued that “countless romance novels employed ‘cocky’” in their titles well before Hopkins laid claim to it, that “no one should hold a monopoly on cocky”, and that “cockiness (in all its permutations) remains as prevalent in romance novels as the use of stunning, scantily clad models on their covers”.

It would be, they wrote, “like an author claiming trademark rights in the word death as a series title for murder mysteries and suing anyone who used that word in the title of their crime stories”.

As Flood points out, this lawsuit is unusual: the Authors Guild rarely intercedes on behalf of individual authors, especially in suits against other authors. But as the Guild stated in court, “Any order that restricts creative expression in favour of promoting the tenuous (at best) purported rights of a single author is simply contrary to the public interest in freedom of expression.”

For what it’s worth, Hellerstein has been involved with several important court cases relating to 9/11, presided over the copyright infringement case between Shepard Fairey and the Associated Press over Fairey’s iconic “Hope” poster, and, in 2004, denied the CIA’s request to delay a review of whether certain internal files related to Iraq should be made public. The ACLU’s victory in that instance ultimately led to the release of the Senate Intelligence Committee’s Report on Torture.

Nice to see the guy finally deciding on something that really  matters.