Yet another politician is in trouble for publishing a book 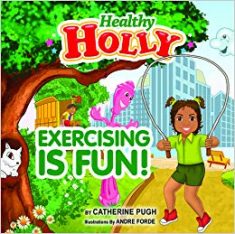 The mayor of Baltimore has taken an indefinite leave of absence following a scandal involving yes, a children’s book series. Now how do you screw that up?

The Healthy Holly series, self-published by Mayor Catherine Pugh, tells of an African-American girl who promotes role-model qualities for inner city youth, including “healthy eating and exercise.” Titles including Fruits Come in Colors Like the Rainbow, Vegetables Are Not Just Green, and Walking With My Family Is Fun. So far, so fun, right?

According to various outlets, including NPR, however, large quantities of Healthy Holly totaling in the hundreds of thousands of dollars were purchased by health care providers First University of Maryland Medical System and Kaiser Permanente, both of which Pugh is a board member. Because these deals were not disclosed, the breach of interest has since resulted in a state-led investigation launched by the Governor of Maryland.

This isn’t the first time a politician has gotten into trouble for clandestinely negotiating high volume book sales to private companies. One-term Democratic Speaker Jim Wright might have survived for two terms had Newt Gingrich not instigated a House Ethics Committee investigation into whether Wright had made illegal negotiations on behalf of his memoir Reflections of a Public Man.

Ironically, Gingrich was also investigated for book fraud when it was discovered he used over one hundred thousand dollars of Republican party campaign funds to promote his book Window of Opportunity: A Blueprint for the Future, which has a jacket that falls somewhere between Mein Kampf and dystopian sci-fi.

Vegetables Are Not Just Green sounds a lot less stomach churning by comparison.