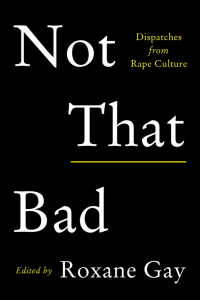 Over the last month, the spotlight of popular outrage has once again turned (rightly) to illuminate the heinous, often habitual, sexual abuse that takes place in our culture. The details—the names, the stories, the sheer number of accusations levied against single individuals—are news. The problem is not. The last few years have seen Bill Cosby, Woody Allen, and Bill O’Reilly—powerful men all—doing their best to stare down the revelations raised against them. Many, but not all, have failed.

Given all of this, shining a single spotlight isn’t nearly enough. We need to turn the houselights up real bright like the show is over.

Roxanne Gay’s forthcoming book, due out from Harper Perennial May 2018, is a step in that bleakly urgent direction. The publisher writes:

In this valuable and revealing anthology, cultural critic and bestselling author Roxane Gay collects original and previously published pieces that address what it means to live in a world where women have to measure the harassment, violence, and aggression they face, and where they are “routinely second-guessed, blown off, discredited, denigrated, besmirched, belittled, patronized, mocked, shamed, gaslit, insulted, bullied” for speaking out. Contributions include essays from established and up-and-coming writers, performers, and critics, including actors Ally Sheedy and Gabrielle Union and writers Amy Jo Burns, Lyz Lenz, Claire Schwartz, and Bob Shacochis. Covering a wide range of topics and experiences, from an exploration of the rape epidemic embedded in the refugee crisis to first-person accounts of child molestation, this collection is often deeply personal and is always unflinchingly honest.

And here is the Table of Contents with the incredible contributors. pic.twitter.com/yFOdRR9iWM

The Difficult Women author is no stranger to this subject. She’s chronicled her own experience with rape in her recent memoir Hunger and in the household-name-making Bad Feminist. In An Untamed State, her debut novel, Mirelle, a Florida-based lawyer vacationing in Haiti, is repeatedly raped and abused when her father refuses to pay her ransom.

While it’s unclear whether or not the included essays will name names, all of the writers included will be describing at length their personal experiences with sexual abuse. More heavy, but necessary, reading for our seriously troubled, seriously troubling times. As HarperCollins write in their promotional matieral, “‘not that bad’ must no longer be good enough.”