Wonder of wonders, Saturday of Saturdays 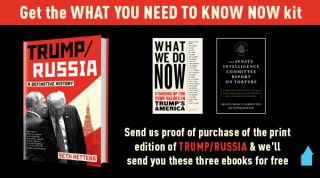 Here’s the quick of it: it’s been a hell of a week.

Before we go into all of it—and there is, oh children, plenty to go into—one big thing that’s going on is that we’re giving away three free e-books. Through Tuesday, when you buy a print copy of Seth Hettena’s entirely urgent Trump / Russia: A Definitive History, we’ll send you three e-books: Trump / Russia, The Senate Intelligence Committee Report on Torture, and What We Do Now: Standing Up for Your Values in Trump’s America. We call it the What You Need to Know Now Kit. All you need to do is email your proof of purchase to us at [email protected]. We’ll send along the e-books within twenty-four hours. More info right here.

But that’s not all we’ve been up to. It’s been a week among weeks, and we’ve had the bloggage to prove it: The Girlhood of Mary Virgin” by Dante Gabriel Rossetti, born 190 years ago today

We were also extremely happy to publish:

There were, inevitably, a few stories we just didn’t get to:

We published two books this week:

And, finally, it is Saturday morning: cartoon time across the land. And if you’ve had just about all of this week you could take, perhaps you’ll find some catharsis in the warped, wild stylings of Lupo the Butcher, a guy who just can’t seem to keep his cool:

And with that, dear friends, till Monday. As ever, stay loose, be well, get free e-books, and you’ll catch us right back where you left us. Oh, what the hell, let’s look at one more painting first: “Personification of the month of May” by German painter Joachim von Sandrart, born 412 years ago today.