Like so many stories lately, this one starts with a tweet that came ringin’ out like Christmas bells. No, not another Trumptweet™ — this one sprang from the Blackberry of overpaid millionaire, civil litigation defendant, and former first daughter Chelsea Clinton. Linking to Washington Post reporter Samantha Schmidt’s recent story on the burning of an LGBT youth center in Phoenix (no one hurt, building destroyed, humanity a disappointment), Clinton wrote this: 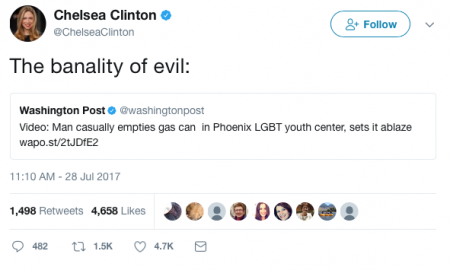 By “the banality of evil,” Clinton seems to have meant something like “detestable behaviors are a commonplace of human civilization” — which, in fairness, is both relevant and true. But the phrase, first coined in the 1963 book Eichmann in Jerusalem, doesn’t mean that.

Eichmann in Jerusalem was written by alleged woman, surprise best-selling author, and Last Interview series participant Hannah Arendt, after she had observed the trial for war crimes of Nazi functionary Adolf Eichmann. Arendt points to the ways Eichmann, an unexceptional man who recoiled from physical violence and wasn’t especially motivated by antisemitism, was nonetheless able to orchestrate the Holocaust with seemingly little compunction. He did this, in Arendt’s view, not through some warped kind of greatness, but through a chilling kind of smallness — checking boxes, fulfilling orders, seeking advancement, working his way, paperclip by paperclip, through a murderous bureaucracy whose murders happened off-screen.

That’s the banal evil Arendt is concerned with. Eichmann wasn’t the sort of dude to splash gasoline all over a building he didn’t like; he was a pencil-pusher, empowered by a bloodthirsty regime, accomplishing his horrific work through a complex of everyday tasks that had been euphemized and abstracted from their ultimate violence to the point of seeming mild. (To be clear, Arendt never argued that this lessened Eichmann’s guilt, just that it characterized his psychology.)

This point was swiftly made by Corey Robin, a political theorist and historian of right-wing movements who teaches at Brooklyn College, blogs prolifically, and has written about Arendt. Robin quickly tweeted: 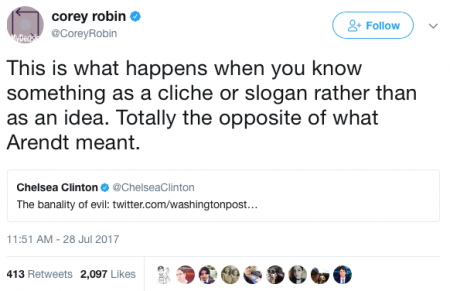 A minute later, he added a dig at Clinton’s education, tweeting, “Sidwell Friends, Stanford, Oxford, Columbia: all that money for fancy schools, and nowhere did you learn the meaning of this phrase?” (Robin, who attended Oxford, Princeton, and Yale, is no stranger to fancy schools.)

In a blog post published Saturday, he writes what happened next:

To my surprise, Clinton didn’t appreciate my commentary.

No, let me rephrase that.

To my surprise, Chelsea Clinton—author of a best-selling book; vice chair of a powerful global foundation; former special correspondent for NBC; possible congressional candidate, with a net worth of $15 million; daughter of the former president of the United States; daughter of the former Secretary of State and almost-president of the United States—read my tweet.

To my even greater surprise, Chelsea Clinton had an opinion about my tweet.

And to my even greater greater surprise, Chelsea Clinton responded to my tweet. 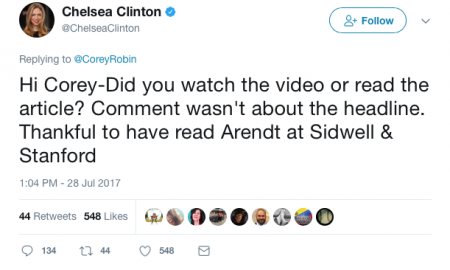 What follows is an excruciating exchange between two nevertheless smart and nice-seeming people. Clinton dodges questions and links to a year-old editorial in which former Boston city official Peter Dreier deploys Arendt’s phrase against Donald Trump, also erroneously (“If someone carries out unspeakable crimes often enough, he or she comes to accept them as ‘normal.’ That was Arendt’s view of Eichmann,” Dreier writes, getting it toootally wrong). And Robin, after entirely making his point, proceeds to continue making his point, insistently treating Clinton like a fellow scholar of right-wing politics, as if punishing her for errantly flying through Professional Smart Person airspace.

You can read the whole exchange unfurling from Robin’s original retweet, or, with interesting commentary, quotations from Eichmann in Jerusalem, and a surprise Hollywood ending, in his account of the encounter on his blog. And you can read more about the horrors of bureaucracy riiight fuckin’ here.

Fire and Fury is a bestseller! Wait --- not THAT one…

An angry dude is suing Chelsea Clinton for copyright infringement

Putting credentialed journalists to shame, in between Pre-Calc and Homeroom