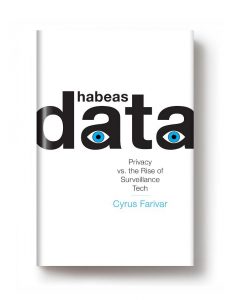 Political and legal watchers were stunned last week when NBC News reported that Michael Cohen, the president’s personal lawyer, had been wiretapped. Attorneys and law professors all over Twitter were quick to remind civilians of the high levels of legal scrutiny that would be needed to obtain a wiretap.

By the afternoon, however, NBC walked the story back. It turned out, according to “three senior U.S. officials,” Cohen was not wiretapped. Rather, he was the subject of a pen register, a lesser-known surveillance tactic.

As I explain in my new book, Habeas Data, on sale now, there’s a world of difference between these legal tools and what’s required for police to obtain them.

Let’s take them one at a time. First up, wiretaps!

In 1965, President Lyndon Johnson issued an executive order establishing a “Commission on Law Enforcement and Administration of Justice.” The commission, which was headed by Attorney General Nicholas Katzenbach, produced a 342-page report in February 1967, entitled “The Challenge of Crime in a Free Society.”

The report dryly noted that the “patchwork of laws” that deal with wiretapping and “electronic eavesdropping” was a mess. In fact, the commission wrote, it is “so thoroughly confused that no policeman, except in States that forbid both practices totally, can be sure about what he is allowed to do.”

In short, the commission urged Congress to take up a laundry list of recommendations, including “legislation dealing specifically with wiretapping and bugging.”

The net result was the Omnibus Crime Control and Safe Streets Act of 1968, which contains a wiretap-related section known as “Title III.”

The balance that Congress struck was that government-enabled real-wiretaps would be allowed, but they would have to clear a much higher bar than a classic warrant.

First, the wiretap request has to come from senior Department of Justice officials, instead of any workaday federal prosecutor. On top of that, the federal trial judge has to make a determination that any other investigative technique had failed, would fail, or would be too dangerous to undertake. (For this reason, lawyers nickname wiretap authorizations “super-warrants.”)

Despite those provisions, President Johnson was still unsatisfied with the law that he signed in the end.

“My views on this subject are clear,” he wrote in a presidential signing statement.

“In a special message to Congress in 1967 and again this year, I called—in the Right of Privacy Act—for an end to the bugging and snooping that invade the privacy of citizens. I urge that the Congress outlaw ‘all wiretapping and electronic eavesdropping, public and private, wherever and whenever it occurs.’ The only exceptions would be those instances where ‘the security of the Nation itself was at stake — and then only under the strictest safeguards.’”

He wrote that Title III could turn the United States into a “nation of snoopers.”

“Thus, I believe this action goes far beyond the effective and legitimate needs of law enforcement,” he continued. “The right of privacy is a valued right. But in a technologically advanced society, it is a vulnerable right. That is why we must strive to protect it all the more against erosion.”Johnson’s preferred bill, the “Right of Privacy Act,” was never enacted.

The Safe Streets Act, with its wiretap provision, remains the law of the land. Decades later, the greatest television show ever made, “The Wire,” was built entirely around the concept of the wiretap.

By contrast, pen registers are an entirely different beast.

Nearly a decade after the Safe Streets Act of 1968, the Supreme Court was asked to hear the case of United States v. New York Telephone (1977).

At its core, that case was about federal authorities ordering a telephone company to install a mechanical monitoring device, known as a “pen register.” These devices were routinely used during the twentieth century at telephone company facilities to monitoring outgoing calls, and as a way to track call quality and keep accurate billing.

Essentially, they record a call log: the incoming and outgoing calls on a given line.

In a 6-3 decision, the court found that Title III only governed aural communication and not the call records that are captured by a pen register. After all, pen registers do not “intercept” anything in the same way that a wiretap does. Or, as we might put it today, pen registers recorded metadata, while wiretaps record content. As calling information isn’t inherently private, there is no warrant requirement to obtain it.

“These devices do not hear sound,” Justice Byron White wrote in the majority opinion. “They disclose only the telephone numbers that have been dialed — a means of establishing communication. Neither the purport of any communication between the caller and the recipient of the call, their identities, nor whether the call was even completed is disclosed by pen registers.”

At the time of the New York Telephone case, federal authorities were citing the All Writs Act as justification for ordering that the company deploy a pen register on its own facilities. (Pen registers were formally codified as part of the Electronic Communications Privacy Act of 1986, also known as ECPA.)

This case, and the use of the All Writs Act, were at the core of the legal battle in 2016 in the showdown between Apple and the Department of Justice, which faced off over the iPhone that belonged to the San Bernardino terrorist, Syed Rizwan Farook.

So if wiretaps require an extraordinary showing of more than probable cause, what does the government need to show to a judge to obtain a pen register? Not all that much, it turns out.

Under ECPA, the law merely requires a “certification by the applicant that the information likely to be obtained is relevant to an ongoing criminal investigation being conducted by that agency.”

Before it reached the Supreme Court, in the case of Smith v. Maryland, a state court of appeals found in 1978 that a pen register did not violate the state’s wiretap law.

However, Judge Harry Cole—the first African-American to be elected to the Maryland Senate and to serve on the Maryland Court of Appeals—was one of the judges who dissented.

In his view, the central issue was not the fact that a particular location was examined, or even that a call was intercepted, or items taken. Rather, it was the “gathering of information,” regardless of what form it came in.

Judge Cole also made a point of calling out the recent abuses of Watergate, and correctly foresaw what the National Security Agency would do many years later with telephone metadata.

“If pen register data were fed into a central computer on a widespread basis, patterns of acquaintances and dealings among a substantial group of people would be available to the government,” he concluded.

Habeas Data is on sale now. Buy your copy here, or at your neighborhood independent bookstore.

Cyrus Farivar is the Senior Business Editor at Ars Technica and a radio producer who has reported for the Canadian Broadcasting Corporation, National Public Radio, Public Radio International, The Economist, Wired, The New York Times, and others. His books include The Internet of Elsewhere and Habeas Data, out now from Melville House.