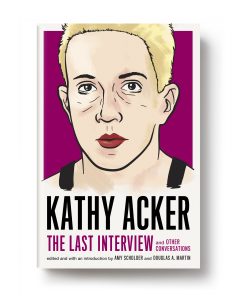 As summer gets going in earnest, we’re taking a look at some of the books we have forthcoming in the next few months. Honestly, we’re getting pretty excited. Right now, let’s have a look at Kathy Acker: The Last Interview and Other Conversations, which hits shelves December 4th.

From Acker’s earliest interviews—filled with playful, evasive, and counter-intuitive responses—to the last one before her death, where she reflects on the state of American literature, these conversations capture the writer at her funny and surprising best. Another highlight is Acker’s 1997 interview with the Spice Girls on the forces of pop and feminism (which reads as if it could have been conducted with a new generation of pop star in 2018).

Kathy Acker: The Last Interview and Other Conversations hits bookstores on December 4th. Here, to help you pass the time (you cut-up), is an excerpt of Acker’s 1994 Artforum interview with Laurence A. Rickels.

RICKELS: Did you latest book [My Mother: Demonology] start out with a particular identification or demonization?

ACKER: It started out as my fascination with Laure’s work and with Bataille, and with wondering what that generation, two generations ago, was thinking. I was amazed reading her work that the same preoccupations I have are there too.

RICKELS: It makes it an amazing time-travel book because, as you say, the ’30s are back, like on the trip to Berlin which is any time, that is, one of the two time, before or after the Nazi station break.

ACKER: The work Bataille and Laure were doing in the ’30s was model-building from the ground up. Neither the democratic nor the post-Leninist model was usable, so they turned to anthropological work and started looking into myth and sacrifice to come up with a new group for a new social model. Whereas Breton settled for Stalinism after psychoanalysis, Bataille and Laure were looking for something else, where irrationality would not be just a matter of mental functions, and sexuality would be something more than just the repressed. We’re in a similar situation today with regard to Russian communism and democracy.

In her search, Laure also looked consciously as a woman, which greatly interested me. So it was by chance (in other words by some determination that doesn’t have a name yet) that in the course of working through Laure’s texts I became interested in witchcraft. And this started my novel. The witchcraft material presented another history of women, or another history — one not written by and about dominant men.

Regarding my personal history: when I began writing My Mother: Demonology I was worrying that I was internalizing certain censorships. Any member of a society does, as Ulrike Meinhof once mentioned. I used to go to sexual writing for my writing freedom. That place was no longer available to me, due to the changes in our society, and due to my own writing history — I didn’t want to repeat myself. All writers are scared of internalizing restrictions; we’re looking for places of freedom that take you that take you by surprise. I read the witchcraft material, and dreaming did surprise me. Dreaming became a technique for deciding the next move in the writing. I don’t know how, I started dreaming about what I had just written that day. I started dreaming what I was writing. I used this as a writing technique. What would happen (it’s especially clear in the Wuthering Heights section) is that I would rewrite, appropriate, plagiarize, whatever — copy (slash-and-gash method) Wuthering Heights, and that night I would have a dream, and the dream would be about Wuthering Heights. I started letting the dream decide where the narrative was going. So Wuthering Heights changed as I dreamed it. I didn’t interpret the dream — like I dreamed about two basketballs lost in a pit and I told myself, in the dream, “Well, you don’t have to interpret that!” I would leave the dream alone and use it to interpret the text.

At the end of my version of Don Quixote I started turning to the body as a resource for new models of writing. For me, deconstructions was used up as a writing technique. That was the first time in my life that I started looking at narrative — that Blood and Guts in High School came together as a narrative really amused me. I’ve never been interested in creating characters or stories, I’ve never been interested in creating anything. I turned to narrative when there was nothing else to turn to; there had to be something more than taking apart constructions. I was coming out of a funny kind of nihilism. There had to be some kind of narrative, but one that wasn’t only a means of control. It was at this time too that I became interested in tattooing, as an art that isn’t just on the body but goes into the body. I started wondering if sitting in the body there was a narrative that was something else. What do you hear when you’re listening to the body, as in bodybuilding, or in sex? What are the language movements? I’m always looking for narratives that I don’t make up but that I’m already hearing.

The first direct work I did on the body/language relationship happened because Parkett magazine asked me to write about bodybuilding, and I found out that I was blocking. So the piece became about why I was blocking. And I realized when people are doing things like bodybuilding or whatever (I’m sure dancers are the same way), there’s a very complication language going on, but it’s not verbalized, it’s almost unable to be verbalized. So people like bodybuilders and dancers sound stupid. I wondered how I could describe this language that won’t allow itself to be described, and why it won’t allow itself to be described. Why, when I do it, does it seem very complicated, and the minute I stop doing it (because I thought I would would just go to the gym, work out, do a diary) it’s gone? I wondered if it was the same language-barrier problem as in sex. I’ve often noticed that when I’m having sex, especially during the movement toward orgasm, I’m having a largely mental affair, images that look as if they can be verbalized, but after it’s all over I couldn’t tell you what was going on. So I wanted to be able to access that language too.

RICKELS: How can you do that, though?

RICKELS: Nietzsche said that all style is breathing.

ACKER: He was right.

RICKELS: So the techniques you’re working out started with bodybuilding and tattooing?

RICKELS: I guess when you forget about the individual characters involved, bodybuilding is about metabolism in a big way.

RICKELS: Right, and writing. It’s totally techno-mediatic: you’re externalizing big time or you’re internalizing at the same time. What gets internalized is something like tattooing, I mean the scarification and internal bleeding that go down when you build up muscle. But if not bodybuilding, which you were into before you came to the Coast, what changes has California introduced into your work?

ACKER: The change would be all the girls, these crazy wild girls who are part of the San Francisco scene. They’re the main characters in the new book. I think it’s the first time in my life that I’m living in a girls’ society — it’s like girls’ school. I’ve got to get out of here! I want to graduate! But there’s real safety here too. Here’s a tremendous freedom in daily living that I’ve never had anywhere else. My strongest desire (it’s beyond desire, it’s a need) is to make it possible for people like me to be in society. Perhaps it’ll have to be a different society. This society tells me that a woman after 30 doesn’t have a body unless she has children. You can’t even be a whore after 30. What I’m seeing in San Francisco is the emergence of a community of younger women that seems revolutionary, and also a relation to the body that I’ve never seen before with women. There’s a play with gender, too: I say “women” but I’m not even sure. This could be the emergence of a place for me, where a woman of color like me (Jews have only been passing as white for centuries ) and a queer (I’m so queer I’m not even gay) is no longer marginalized out of existence.

Samuel Delany to Kathy Acker: “Basically I think most talk of both conscious and unconscious approaches to writing generally more mystificational than not”

Kathy AckerKathy Acker: The Last Interview and Other Conversations