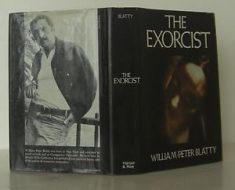 Blatty is best remembered for being the man behind the 1971 novel The Exorcist. That terrifying little tale of demonic possession—inspired by a true story, no less—spent fifty-seven straight weeks on the New York Times Best Sellers List, holding the top spot for seventeen of them. As Sian Cain writes in The Guardian’s obituary, upon news of Blatty’s death Stephen King posted a farewell tweet calling The Exorcist “the great horror novel of our time.”

Blatty also wrote the screenplay for director William Friedkin’s 1973 film adaptation — which features the possessed Reagan (played by Linda Blair) turning her head a skin-crawling 360 degrees, and which enabled most of us to discover all of the curse words we hadn’t learned up until that point. Blatty won an Oscar for his work on the screenplay.

But as we say on the internet: get you a man that can do both. And Blatty could. That is, to say he also wrote comedy, including the screenplay for A Shot in the Dark (1964), an installment of the Pink Panther slapstick mystery series, starring Peter Sellers as Inspector Clouseau.

His 1960 autobiography, Which Way to Mecca, Jack? was followed by several comic novels, including I, Billy Shakespeare (1965), and Twinkle, Twinkle, “Killer” Kane (1966). While his writing was well received by critics—Marvin Levin in the New York Times wrote: “Nobody can write funnier lines than William Peter Blatty, a gifted virtuoso who writes like (SJ) Perelman”—sales and commercial recognition had yet to come.

After winning $10,000 on Groucho Marx’s gameshow “You Bet Your Life” and telling the host he planned to take some time off to “work on a novel”, Blatty wrote and published The Exorcist in 1971.

Blatty would eventually lament the lack of appetite for his comedy after the runaway success of his horror classic. In 2000 he moved to Bethesda, Maryland, where he would live until his death last week from multiple myeloma, a form of blood cancer. He is survived by his wife of thirty-three years, seven children, seven grandchildren, and six great-grandchildren.