Will the screen adaptation of “Dune” live up to readers’ expectations? 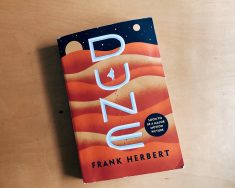 If you’re a fan of science fiction, then you’re probably counting down the days until the 2020 film adaptation of author Frank Herbert’s 1965 best-selling novel Dune hits theaters. Denis Villeneuve’s forthcoming adaptation with its ensemble cast (including but not limited to: Timothée Chalamet, Zendaya, Jason Momoa, Oscar Isaac, Dave Bautista, Javier Bardem, and Rebecca Ferguson) will likely make its mark as a top blockbuster film of 2020. So when the first full trailer for Dune dropped on September 9, 2020, cult fans across the country were left eager for more.

During COVID-19 lockdown, it’s to be expected that people have found themselves picking up reading again and even dabbling in more bizarre genres and themes. And if someone’s decided to wander into sci-fi territory, it’s very likely they picked up a copy of Dune. Cited as the world’s best-selling science fiction novel, it just makes sense.

Unbeknownst to many, Dune was adapted back in 1984 by none other than David Lynch. Many die-hard Dune fans consider this adaptation to be a disappointment, however. When director Denis Villeneuve decided to take a stab at adapting the novel, it is no question that the pressure was high. Rumor has it that Lynch has “zero interest” in seeing Denis Villeneuve’s forthcoming adaptation. (Perhaps he’s a bit salty, eh?) To take it one step further, Lynch doesn’t even want to be associated with the 1984 adaptation of Dune thus requesting that his name be removed from the theatrical cut.

Dune’s plot is not an easy one to follow, but once you immerse yourself in this interstellar society abundant with complexities, there is no going back. For those who aren’t familiar with Dune, all you really need to know is the novel is set thousands of years in the future where humans have settled on colonized planets throughout the universe. (Whoa.) One of these planets, known as Arrakis, has a native super drug known as “the spice” with a number of catalyst effects. Only the wealthiest people can get their hands on it. The novel’s tour de force, Paul Atreides, describes it as “a poison—so subtle, so insidious… so irreversible. It won’t even kill you unless you stop taking it.” (This novel makes one ask some serious questions about man and the natural world.) After the harsh planet of Arrakis is decreed to Paul’s family, their stewardship leads them to a fate that involves dark intergalactic empire confrontation.

As sci-fi as Dune may seem on the surface, Herbert intended to suppress the technology in his fictional universe so politics could rule the court and, in turn, demand the reader’s attention. Dune forces the reader to consider the relationship between humans and the institutions to which they are bound. Some readers may even argue that the novel is simply about the human condition. But if there’s one thing everyone can settle on, it’s that Dune is an epic adventure that incorporates classic storytelling. As for the additional elements, such as its distant future setting and characters that possess colossal superpowers, they just make it that much more interesting and layered.

Book-to-film adaptation has always been a point of contention. There will always be an argument that the book was far better than the film and vice versa. The only way to know for oneself is to pick up the novel and eagerly await the December 18, 2020 release of the film.