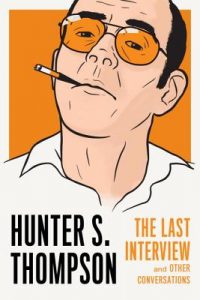 “Did you hear about the musician who was on LSD? He decided to throw himself on the ground and missed.” Yeah, that’s Straight America’s idea of high-larious comedy, circa 1967, as delivered by sitcom mainstay Tom Poston.

The line shows up in this unbelievable flashback: an episode of CBS’s To Tell the Truth, in which four panelist must talk with three young men and guess which of them is, in fact, the young journalist Hunter S. Thompson. At the time, Thompson had just published his first major book, Hells Angels: The Strange and Terrible Saga of the Outlaw Motorcycle Gangs.

Everything about this is perfect. Watch this thirty times right now. Go crazy. Hunter’ll be back here next month, when we publish Hunter S. Thomspon: The Last Interview and Other Conversations. Until then, take care and stay gonzo.