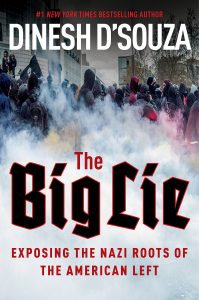 Statistics is hard. I get it. We work in book publishing, and we are people of letters. We draw from these artsy little shape-thingies here assembled some semblance of profundity, if not raw knowledge itself. But numbers can mean things too; and, absent an understanding of how they work in conjunction with letters, ignorance will abound.

As an example of the New York Times’ liberal bias, the press release goes on to point out that “the most recent bestseller list for the week of September 3, 2017 listed [Dinesh D’souza’s] The Big Lie: Exposing the Nazi Roots of the American Left… at #7 on the list, despite being #1 in sales out of all 15 books featured on the list, according to Nielsen BookScan.”

Now, here we’ve got a problem. Over the past three weeks, D’Souza’s vomitous clump of non-scholarship—aptly desribed by our own Mark Bray in LitHub last month—has by Nielsen’s count technically outsold the other titles only in the week ending August 20, and even then only barely. [Source: me looking at BookScan.]

What’s more notable, and almost completely lost on the fine people of Regnery, is that statistics is not always about a raw number. While Bookscan claims to account for eighty-five percent of book sales—a dubious claim anyway, but that’s for another post—it may not actually represent a book that is a bestseller. As the community of YA readers learned a few weeks ago when Handbook for Mortals appeared atop bestseller lists, book sales can be manipulated by bulk and strategic buying in order to artificially inflate the popularity of a title.

Such, it seems, is the case with D’Souza’s crusty armpit of a work of (non-?)fiction. The Times denotes books whose sales are inflated by bulk ordering with a cross in the list, and they presumably factor that in to avoid distorting the actual popularity of a book. In the Times’ notes on the methodology they use in creating their bestseller list, they state that “[s]ales are defined as completed transactions by individuals during the period on or after the official publication date of a title. Institutional, special interest, group or bulk purchases, if and when they are included, are at the discretion of The New York Times Best-Seller List Desk editors.”

The operative word here is “individual.” It’s worth noting that no regional independent bookstore bestseller lists have included D’Souza’s book as a bestseller; it’s only Nielsen.

By unweighting bulk and institutional buys, as well as factoring in the popularity of books at multiple vendors in a broad swath of the country, the Times gets at least closer to portraying a book’s true popularity. While the narrative of liberal media bias is always sexy, and it sure appeals to Regnery’s base audience, it does not pan out in this instance.

David Bauder of the Associated Press quoted Regnery President and Publisher Marji Ross as saying, in a letter to authors, “I ask you to consider this: We are often told it’s foolish to bite the hand that feeds you… I say it’s just as foolish to feed the hand that bites you.”

Marji, I couldn’t agree more. And while I wouldn’t give a thought for your pennies or injure your insults, I might be inclined to bush around your beat long enough to cover a book by its judge. In any case, your press release and disaffiliation from the Times is milk spilled on a crying baby.