Why you need to know 2018 Man Booker winner Anna Burns

The winner of the English-speaking world’s arguably most lucrative literary award, the Man Booker Prize, was announced last night. 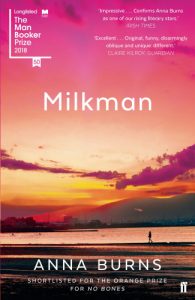 Out of a six-person shortlist that included Americans Rachel Kushner and Richard Powers (a controversial inclusion, depending on whom you ask) North Irish writer Anna Burns won for Milkman, a novel set in Northern Ireland during the Troubles, the armed conflict between the country’s anti-British Catholic separatists and the pro-British Protestant unionists.

As the Guardian’s Alison Flood and Claire Armitstead point out, the novel is not about the conflict itself (if curious, read this Bono op-ed) but rather under its backdrop, the Milkman’s narrator is a 18-year-old woman who tells the story of how a paramilitary figure attempted to manipulate notions of loyalty to coerce her into sexual relations.

If the premise rings your #MeToo bell, you’re not the only one. The chair of judges, Kwame Anthony Appiah, said of Milkman that “it is commended for giving us a deep and subtle and morally and intellectually challenging picture of what #MeToo is about.”  He went on to say:  “Anna Burns’s utterly distinctive voice challenges conventional thinking and form in surprising and immersive prose. It is a story of brutality, sexual encroachment and resistance threaded with mordant humor.”

This is Burn’s third novel and the prize marks her first since she was shortlisted for the Orange Prize (now the Bailey’s Women Prize for Fiction) in 2002 for her novel No Bones. Burns is the first woman to win the Man Booker since New Zealander Eleanor Catton won for The Luminaries in 2013, and she is the prize’s first-ever North Irish recipient. Milkman has yet to be published in the United States, but you can read an excerpt of  Milkman here until it does, which is quite likely.