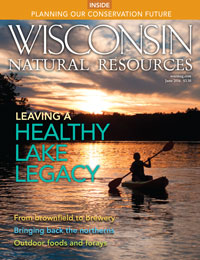 As the Milwaukee Journal Sentinel’s Lee Bergquist reported last week, Walker’s 2017–2019 budget would scrap Wisconsin Natural Resources, which publishes features on department policies, conservation, and outdoor lifestyle for around 75,000 paying subscribers, including 40,000 people who receive the magazine when they purchase fish and game licenses.

The Walker administration said the cut would save the state $300,000 and eliminate two positions at the agency, claims that were disputed by several former department employees.  George Meyer, who ran the DNR until 2001 and now heads the Wisconsin Wildlife Federation, told Wisconsin Public Radio’s Glen Moberg that the magazine “has always been totally subscription paid for. No tax dollars or hunting or fishing license fees… and that includes staff,” and that the “proposed cancellation fits a pattern of suppressing information about the effects of climate change, including changing references to it on the DNR website.” This seemed to be confirmed by Larry Sperling, the magazine’s editor until 2011, who told Bergquist that “there isn’t a lick of tax savings” in the proposal.

Wisconsin State Journal’s Steven Verburg has been doing terrific reporting on  the whole affair, interviewing former magazine contributors who claim there’s been increasing pressure to avoid publishing articles on climate science and endangered species since Walker’s DNR secretary Cathy Stepp took over in 2011. He also spoke with publishers of several Wisconsin outdoor lifestyle magazines who described the gap that would be left if Wisconsin Natural Resources were discontinued, contradicting a claim by a Walker administration spokesperson that the magazine “duplicate[s] what is available in the private market.”

Of course it’s always easiest to revert to the standard conservative line, and no one will be surprised the Walker administration would prefer to let a not-yet-existing private publication disseminate vital information about the safety and sustainability of state resources, rather than the agency that’s charged with caring for them. As another former DNR secretary, Scott Hassett, told Verburg, “You have these legislators beating up the agency who don’t know what the agency does, or they are playing on public ignorance of what the agency does.”