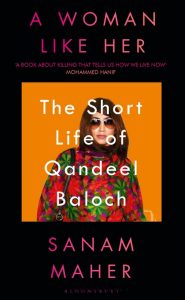 The UK edition is being published by Bloomsbury and comes out July 11, 2019.

This past Sunday, the Guardian featured a piece by Rachel Cooke on fellow journalist Sanam Maher and her book A Woman Like Her: The Short Life of Qandeel Baloch, which is out this month in the UK. It’s an incredible work, which is why Melville House is proud to be bringing it out in the US edition next spring as A Woman Like Her: The Story Behind the Honor Killing of a Social Media Star.

Baloch, a one-time contestant on Pakistani Idol whose massive online fame and appeal drew comparisons to Kim Kardashian, used her fame to promote woman’s liberties in her patriarchal homeland. After her death at the hands of her brother in an apparent honor killing, tributes poured in from across the world, including from Western celebrities such as Miley Cyrus, Jamie Lee Curtis, and even, yes, a Kardashian (Khloe). Madonna later narrated a short film that documented the significance of her life and the atrocity of her death.

“I didn’t want to put her on a pedestal in my book,” Maher told Cooke. “I want people to make up their own minds about her. But I remain amazed by her, and it is very cool to be getting messages from readers across Asia telling me that, though they’d begun by wondering why I wanted to write about someone they saw as trashy, they now have real compassion for her.”

In A Woman Like Her, which is told with an arresting narration that conjures Truman Capote’s In Cold Blood, Maher looks to Qandeel’s story to examine the culture she was up against and the challenges others like her have met in bringing exhilarating modernity to a fiercely traditional society. Maher told Cooke that her life and death have since become a galvanizing force for women’s rights in countries like Pakistan that have yet to warm to them.

“We’re not done with her yet. This happened in 2016, and three years on, we’re still talking about her. Women here take great courage from what she said and how she behaved. We tend to have these moments in Pakistan. They’re often, as was the case with Malala, brought on by great violence. They’re a moment of reckoning … When I see the pictures of women’s marches here, her face is always in the crowd: people wear masks of it. Her legacy is to encourage young men and women to think that if she could speak out, we should all at least try to do the same ourselves.”

You can read an excerpt of the book in the write-up.