Who will step in for Man? Previous winners speculate on the Booker Prize’s future 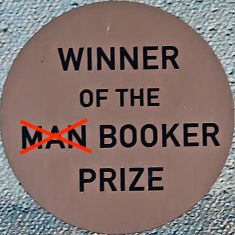 As we reported yesterday, The Booker Prize parted ways with Man Group this week; the hedge fund that financially backed the U.K.’s most famous literary prize for the last 18 years. For The Guardian, Alison Flood and Sian Cain spoke with a number of authors, agents, and literary prize representatives about what this all means for the Booker Prize’s future.

Announced on Sunday, Man Group has pulled out of sponsoring the 50,000 pound literary award, claiming it cost 1.6 million pounds a year to fund. No spokesperson from the hedge fund has let on as to why they’ve decided to pull out, but according to The Guardian’s intel from a “leading literary figure” who chose anonymity, there was growing tension between Man Group and the Booker Prize committee.

“Man has been complaining for some time that the ‘partnership’ with Booker was not working and that the Booker [Prize Foundation] did not properly consult with them but continued to act as if they were the sole sponsor,” says the anonymous source. “Booker has also not listened to feedback from publishers about their change of rules.”

The source is presumably touching on the Booker’s decision to open the award to American authors, which it did two years ago. Since then, the award has been awarded to two American writers, Paul Beatty followed by George Saunders.

For some of the Prize’s previous winners, the reasons ranges widely. As The Guardian writes, “some have speculated that Man Group pulled out due to criticism of their role as a financial institution, as well as their influence on the prize. In July, author Sebastian Faulks branded Man Group ‘the enemy,’ saying: ‘Man Group are not the sort of people who should be sponsoring literary prizes. They’re the kind of people literary prizes ought to be criticizing.'”

(But it’s 2019. Which organization doesn’t have secret (or not) financial backing from suspect companies? Even the Fyre Festival docs had financial ties to the creators (and marketers) of Fyre Festival!!

In response to the news, Joanna Prior, chair of the board of Women’s Prize For Fiction, told The Guardian that corporate support is vital for literary awards: “Without corporate sponsorship, the work of bringing books into the lives of as many people as possible becomes ever harder.”

Regardless, nothing lasts and nothing is sacred.