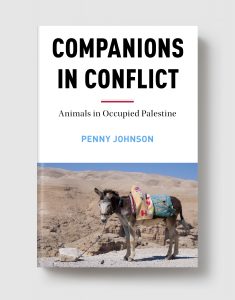 Animals, with the exception of some humans, do not listen to election promises. But the successful campaign of Benyamin Netanyahu for his fifth term as Prime Minister of Israel held a promise that is a very real threat, most directly to Palestinians living in the occupied West Bank and their animal companions, but also to all who inhabit the fragile land between the Jordan River and the Mediterranean Sea, now the state of Israel and occupied Palestine. That threat is annexation. And even the current Israeli political turmoil—with new elections scheduled for September—is unlikely to deter his politician’s promise that is a looming threat.

To be sure, election promises often fade, but this one is clearly premised on the support from the Trump administration when the much-touted “deal of the century” is released sometime, analysts predict, this summer.  It is also undergirded by Israel’s more silent process of de facto annexation of occupied territory that is half a century old. President Trump’s deal reportedly allows Israel to annex “settlement blocs,” and Prime Minister Netanyahu has added that no settlement, however isolated, will be “left behind.” In return, Palestinians are offered a package of economic incentives; Palestinian opposition to the upcoming economic conference in Bahrain signals that Palestinians will undoubtedly refuse this toxic offer.

The deal of the century is thus unlikely to be concluded but the Netanyahu government or a successor right-wing government may well seize the opportunity to annex as much of Area C as possible: U.S. Ambassador to Israel David Friedman has already told the New York Times that Israel has a “right” to annex parts of the West Bank, Area C is the over 60% of the West Bank under direct Israeli control, including over 80% of the Jordan Valley and much of the Jerusalem wilderness, home to much of the occupied West Bank’s wildlife, including mountain gazelles (gazella gazella).

My sharp-eyed friend Rema drives several times a week from Jerusalem to teach at Birzeit University, twelve miles north of my city of Ramallah, taking whatever route has the least obstacles that day. She reports several sightings of mountain gazells on the hills near the bypass road—a road constructed for Israeli settlers to bypass Ramallah and its surrounding villages and thus declared in Area C. Whatever the designation, I breathe a sigh of relief. Our mountain gazelle has recently entered the red list of endangered species and walking in a familiar deep valley (wadi) near Ramallah, I can envision gazelles only in memory, picking their delicate way up the terraced slopes. Perhaps, I thought, this lovely verdant spring, after so many years of diminished rainfall and drought, has encouraged gazelles to return to our wadis to sip at the small pools of spring water which shine among the rocks, at least for a few weeks. Then I remember what may come after spring, not only the dry desert wind (the khamsin) that turns the land yellow, but a political whirlwind that is even more dangerous.

Annexation is clearly a disaster for the 300,000 Palestinians living in Area C and for the rest of us in occupied Palestine who will be increasingly confined to our small enclaves. (It is also clearly illegal under international law, as are the 120 settlements in Area C). But what does annexation mean for the animals that also inhabit the central highlands, Jerusalem wilderness and Jordan Valley areas that constitute the occupied West Bank? Mountain gazelles are the iconic wild animals of our land, celebrated in poetry and heart-breakingly lovely. But what about the elusive striped hyena, now numbering only in the hundreds, and whose range, like the gazelles, has been curtailed already by the Separation Wall? Or our other animal companions such as the flocks of sheep and goats and the patient donkeys that accompany the farmers, herders and Bedouin that are the main Palestinian inhabitants of Area C? The fate of people and other animals are inextricably intertwined in our fragile landscape. Abu Toufiq, an elderly man living in a herding community in the northern West Bank that falls in Area C told me: “Our wealth is in our animals. They are in our blood. I am Abu Jid (the father of goats).” He gazes out at a spring-green plain, but grazing there is prohibited. His community, unrecognized by the Israeli authorities, lies between two Israeli settlements and near the Separation Wall.

To be sure, Palestinians are not always stellar companions of the animals around them: occupation can make individual and family survival paramount. Palestinian environmentalists and animal welfare activists, like their Israeli counterparts, often fight an uphill battle. But annexation, along with the expulsion of Palestinians and their animals from much of Area C, would inevitably bring with it more fragmentation and barriers, increased settlement and urbanization, a spike in road and infrastructure building and sharp increases in water inequality (the Israeli prime minister has long wanted sole control over the mountain aquifer, the main water source for both Israelis and Palestinians). Truly, to paraphrase an old anti- war slogan, annexation is not good for humans or other living creatures.

Animals, again with a human exception, do not wave flags, but a gazelle, like a Palestinian, cannot cross a high concrete wall or navigate a maze of barriers, barbed wire and roads built for exclusion. On a hill near Birzeit University, the Palestinian Museum, a striking building shaped like an open book, recently launched a new exhibit “Intimate Terrains: Representations of a Disappearing Landscape.” The impressive artworks are marked by an absence of animals – except for wounded gazelles. Artist Manal Mahamid has installed a larger than life white ceramic gazelle with an amputated leg and a wound on her side. Her gaze at us is steady: how will we answer?

Penny Johnson is the author of Companions in Conflict, published by Melville House in February 2019