Vanderbilt Professor and Psychiatrist Jonathan Metzel was reading from his new book Dying of Whiteness: How the Politics of Racial Resentment is Killing America’s Heartland when roughly ten angry white nationalists charged into the store, armed with a megaphone and video camera.

The men refer to themselves as “identitarians,” a term that sounds like a trendy diet but signifies their commitment to something much, much dumber called the “American Identity Movement,” or “AIM.” I won’t summarize their ideology here; suffice it to say, this is the newest incarnation of “Identity Evropa,” one of groups that organized the rally in Charlottesville.

Charlottesville, in fact, is the reason for the rebrand: Identity Evropa leader Patrick Casey has clearly launched AIM in response to the lawsuit a group of Charlottesville residents filed against Evropa for inciting violence against racial minorities. It’s worth noting that in addition to being present at Charlottesville, Casey has also been spotted at the south front of the White House, and, you guessed it, at Metzl’s Politics and Prose reading (this user’s account has been set to private but if you’re able to watch the footage, he’s the one with the microphone).

There aren’t too many hot takes one can make about this event. We’ve been watching white nationalists grow steadily more emboldened, and it comes as no surprise that they should disrupt a site of critical thinking and progressive values. After all, similar groups have been targeting other bookstores, book fairs, and libraries across the country. As Politics and Prose co-owner Bradley Graham told The Washington Post, the bookstore staff had already begun pondering the question of how to prepare for flash protests, although they were prompted not by the far right but by demonstrators who’d shouted down Former Secretary of Homeland Security Janet Napolitano a month before at an event ironically billed as “How Safe Are We?” 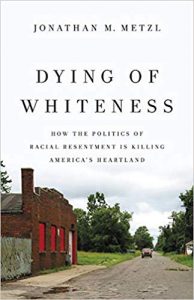 Arguably, the best take on what happened at Metzl’s reading comes from Metzl himself, who told The Washington Post that shortly before AIM made their entrance, he had been talking about an Austrian man in the bookstore audience who had helped Metzl’s father and grandparents flee the Nazis. AIM arrived just as he was making the point that America “is stronger when we think about our responsibility to people in need.”

There’s no good moment to be interrupted by a hate group, but Metzl, who deserves the final word in this post, said, “It was very symbolic for me … they’re illustrating my point.”

Liv Lansdale (@liv_actually) walks dogs in Brooklyn and is a regular contributor to MobyLives.