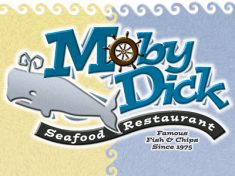 You remember how when you read Moby Dick as a kid all you could think about was the “Dick” in the name? A puerile suggestion, to be sure, but perhaps one that resonates with our fair readers. Nevertheless, it took all of about two seconds for all of us to get over it and actually read the book.

Not so for a building council in Vancouver, Canada. They encountered the word “Dick” and immediately furrowed their brows and recited ten Hail Marys. According to reporting by Darryl Greer for the Courthouse News Service, the council recently refused to let a chain of seafood restaurants called Moby Dick Fish and Chips open a location in their jurisdiction, because the word “Dick” is offensive. Apparently, Ahab’s quest for revenge against the Dick that ruined his life didn’t prevent children from imagining large phallic objects on… fish? (Sperm whales are mammals, by the way, and I suppose using the word “sperm” in front of the word “whale” would also wreck the delicate minds of our youth.)

If, God forbid, someone had taken five minutes to actually look at the origins of the “Dick” in the name, they’d have seen that Melville’s inspiration was an infamous, murdersome, real-life spermer (my newly invented term) named Mocha Dick. Which, now that I’ve typed it out, I realize sounds WAAAYYYY worse. In any case, Dick was just a name. You know, like John, Jacob, Julian, Jones, or Jackass (an appropriate sobriquet for people that think the name “Dick” is offensive). And the word “Mocha” comes from the name of an island not far from where the devilish sea-monster roamed.

If the building council is thinking about banning other restaurant names needlessly, I’d suggest: “Go the Fuck to Sleep Turkey Emporium” or “Bastard Out of Carolina BBQ and Southern Rub Shoppe.” And as for the people of Vancouver, I hope you get your Moby Dick Fish and Chips soon.