Ah, for the salad days, before Twitter, when we had to wait to mock politicians until they audibly uttered their terrible grammar (we’ll never forget you, Dan Quayle, you mighty Potatoe-head). It’s almost depressing; we were robbed of so many amazing tweets from Quayle, Dubya, and countless others. Damn you, technology, for not being swift enough!

Which is why we’ll just have to take solace in the slightly depressing grammatical mistake made by the official Twitter account of Indian Prime Minister Narendra Modi: 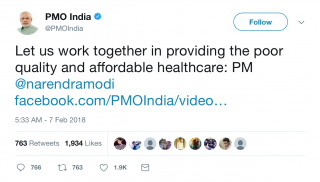 OK. We know where he was going with this. And no one with half a brain would read this tweet and actually think, “That bastard wants to give people healthcare of poor quality!” (It should be noted that the tweet came from the official PMO handle, which is not personally run by Modi.) But, sadly, muddied intentions are precisely the consequences when you use an adjective as a noun, without a preposition to sandwich that shit up. Just adding “with” after “poor” would have solved the PM’s problem (#grammar is fun!).

Twitter, because it is Twitter, was quick to castigate Modi. Anurag Verma cites several examples in this piece from CNN-News18 (an English-language partnership between India’s TV18 and CNN International). Unfortunately, Verma also gets it wrong.

What the Prime Minister meant was — “Let us work together in providing the poor, quality and affordable healthcare.” Instead, it read as if we should ‘work together’ to help in ‘poor quality’ healthcare.

Tweeple, quick on their feet, noticed the missing comma in the tweet and decided to give Modi some grammar lessons.

No, CNN-News18! What are you doing?! There is no missing comma. A comma just makes this nonsensical word salad… but at least less offensive word salad? No. Obviously that sentence is not any better.

Times Now, on the other hand — they get the A+: “The intention and the sentiment behind the statement are fine, but a missing ‘with’ after the word ‘poor’ let Netizens tell the PM as regards the significance of punctuation.”

Sadly, #MissingPrepositionGate hasn’t provided the only Twitter coals Modi has been raked over lately. It hasn’t been a good Tweek (sorry) for the PM; last week, he graciously welcomed his Canadian counterpart Justin Trudeau to India in a tweet. The problem? Trudeau had arrived in India five days prior to that. As Business Today reports, the delayed-reaction tweet might have have been some shade-throwing, as there’s been speculation the Indian government is giving Trudeau the ol’ brush-off. This, BT speculates, may be in response to Canada’s “alleged support to Khalistan separatists.” And, as we all know, feuding between world leaders works really, really well on Twitter. #SickPuppy #Dotard #LittleRocketMan #JFCMAKEITSTOP

The upshot? Modi should really get a better handle on his Twitter handle (sorry not sorry). As for shaming him over his grammar, it’d be great to get Chrissy Teigen on the case.