Amazon, in coalition with Starbucks and Microsoft co-founder Paul Allan, has succeeded in its bid to repeal an employee hours tax (EHT) unanimously approved last month by the Seattle City Council. The tax was initially recommended by the Progressive Revenue Task Force (PRTF), an initiative that grew out of the 2017 Housing, Outreach, and Mass-Entry Shelter (HOMES) Proposal. The HOMES Proposal was written by council members Mike O’Brien and Kirsten Harris-Talley in an attempt to address Seattle’s horrifying homelessness crisis.

Since their proposal was brought before the City Council in October of 2017, Amazon and other sentient piles of accumulated capital have been fighting tooth and nail to prevent Seattle from enacting any form of progressive taxation. Amazon temporarily halted construction on its “Block 18” development in downtown Seattle, and—allied with the Seattle Chamber of Commerce—went on a blitzkrieg PR campaign against the “anti-jobs” EHT, affectionately known by corporate spin-doctors as a “head tax.”

Initially, the corporate hydra of Amazon, Starbucks, and Vulcan, Inc. (Allan’s investment and philanthropy concern) convinced the council to reduce the tax rate from $500 to $275 per employee per year. That would work out to around 50 million dollars annually. As top-rate reporter and Melville House comrade David Streitfeld points out at the New York Times, that’s less than fuckin’ nothing to Amazon:

As the largest private employer in the city, with more than 45,000 local workers, Amazon would have had to pay initially about $12 million a year — a relative pittance for a company with revenue last year of $178 billion and whose chief executive, Jeff Bezos, the richest man in the world, said recently that the only thing he could think of to spend his fortune on was space travel.

Nevertheless, Amazon, unsatisfied with that meager concession, continued to press. The result: a 7-2 vote to repeal the EHT this past Tuesday. The only two members of the council to vote against repeal were Kshama Sawant and Teresa Mosqueda.

Kevin Schofield, writing at SCC Insight, has compiled some quotes from the council members’ pre-vote speeches, which are pretty striking. Not because they provide any evidence that the council members (all of whom had voted for the original legislation) have changed their tune on the tax, but because they have not. Jeff Stein, of the Washington Post’s Wonkblog summed things up nicely in a tweet yesterday: 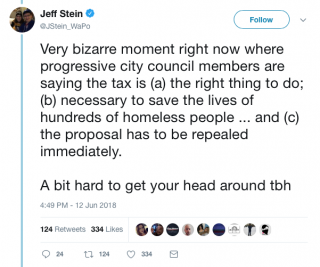 Insane. Take a look at these quotes:

“Within our regressive, unfair tax structure, I believe the EHT was truly our best option.” —Lisa Herbold, voted to repeal the tax

“From my policy analysis, this is the best tool that we have… The employee hours tax is the one that makes the most sense. It’s not a perfect tax, but it’s the most fair.” —Mike O’Brien, co-author of the HOMES Proposal, voted to repeal the tax

“We have a real crisis in our city, and this was a clear solution to generate the real revenue that we needed to be able to meet those needs.” —Lorena Gonzalez, voted to repeal the tax

The argument made by each of these members was that Amazon and its corporate allies had mobilized too much money, had been too successful in spreading misinformation about the roots of the crisis and the costs of the solution, and that the political battle that would have to be fought to defend the resolution was not winnable. It’s indisputable that the campaign to overturn the EHT was extraordinarily well funded, and that the rhetoric of job-creation and economic dynamism was expertly deployed by opponents of the tax. And it’s definitely true that supporters of progressive taxation everywhere face an uphill battle against both entrenched corporate interests and generally regressive attitudes towards economics.

Still, it’s far from a foregone conclusion that the campaign could not have succeeded. Members of the Seattle City Council have a moral obligation to provide immediate assistance to the families who’ve been pushed out of their homes by Amazon’s economic and cultural transformation of the city. No likelihood of failure frees them from that obligation. 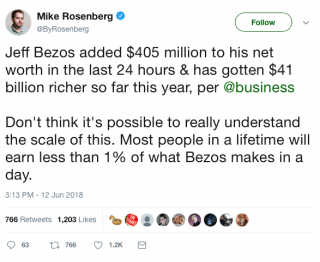 In a single day, Jeff Bezos (one human) makes eight times what the Seattle City Council was hoping to raise for hundreds of homeless families in a year.

Here, let’s cede the floor to this hero, who, it is humbly suggested, should definitely run for president.

Close your fuckin’ beaks, move your feet, get shit done. Let’s see that on a campaign poster.