Ah, the nuance and beauty of the collective noun. Everyone has their favourite, from a murder of crows to a shrewdness of apes or an obstinacy of buffalo.

Lane Smith’s book There Is a Tribe of Kids, which celebrates and teaches kids some unusual collective nouns, has won the 2017 Kate Greenaway Medal for Illustration. It pairs up with Ruta Sepetys’s Salt to the Sea, which received the Carnegie Medal for best children’s writing. Each author received a £5,000 cash prize from the Colin Mears Award, £500 worth of books to donate to their local library, and a specially commissioned golden medal at the award ceremony on June 19th. The Carnegie Medal was set up in 1937, and the Kate Greenway Medal in 1957.  Both important events in the UK literary calendar, they also stand out for being awarded solely by librarians.

Both awards have also been steeped in controversy of late. This year, for the first time ever, both were won by American authors. Awards have a huge impact on book sales in the UK (something we reported on back in December, when American Paul Beatty won the Man Booker), and this news will not be welcomed by all. At the time of writing, Salt to the Sea is the sixth-bestselling book on Amazon.co.uk.

More shockingly still, when the longlist for Carnegie Medal was announced, all twenty authors were revealed to be white. In fact the Carnegie has never been won by a BAME (Black, Asian or Minority Ethnic) writer. 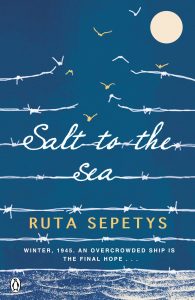 Outcries have come from authors including Phillip Pullman, Alex Wheatle, Sunny Singh, and Alan Gibbons. Gibbons, who has been shortlisted for the Carnegie twice, expressed his outrage to Danuta Kean at the Guardian: “Why has Malorie Blackman never won? Bali Rai, Leila Rashid, Alex Wheatle, Benjamin Zephaniah, Catherine Johnson, Candy Gourlay? It is high time the Carnegie reflected multi-ethnic Britain.”

Singh, who set up the Jhalak Prize to seek out the best books by British BAME writers, told Kean that white authors need to take a stand. “There has to be collective action. It cannot just BAME writers against it, it has to be all authors. It’s all very well for already marginalised people to do a boycott, but if you are already excluded, what difference will it make to not enter?”

As a result, the Chartered Institute of Library and Information Professionals (CILIP) launched an inquiry back in March. At the time, Kean wrote:

Cilip chief executive Nick Poole said: “Recent concerns [over the Carnegie longlist] have shown that we need to articulate very clearly what we are doing to address the issues of equality and diversity.” He added that, although the association believed the decisions made about this year’s medal longlists were “appropriate” and reflected the existing criteria for selecting books, there may be a case for changing the criteria to protect the prize from unconscious bias.

This bias could stem from the UK library industry as a whole. A 2015 report by CILIP and the Archives and Records Association highlighted the race and gender gap in the UK information sector, noting, among other things:

Grim findings that it will undoubtedly take time to change. It will be interesting to see how this all impacts next year’s awards. In the meantime, let’s bask in the loveliness of collective nouns and Smith’s undeniably beautiful illustrations.