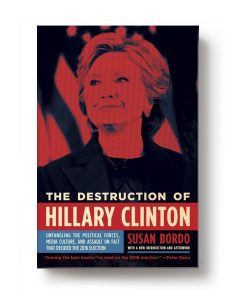 Earlier this month, we were delighted to release Susan Bordo’s The Destruction of Hillary Clinton in paperback. Later, things on our Twitter feed got… a little crazy, when Clinton herself retweeted us bragging about it. This month, we’re delighted to share “What’s Happened Since,” the brand-new Afterword to the paperback edition, a few parts at a time. If you missed Parts 1 and 2, check them out right here. Today, Part 3. Read ’em all, order the book here, and get ready for the conclusion in a few days.

3. THE “GO AWAY” AND “BLAMING EVERYONE BUT HERSELF” TROPES

Just this past week, Joe Scarborough with (as he introduced him) “legendary news anchor” Bob Schieffer, shook their heads over how Trump could have gotten elected, bemoaning the inferior “talent pool” the Democrats had drawn from, and the “poor quality” of the eventual contenders. Why, back in Scarborough’s day, he could name ten senators who were “giants”! Clinton’s stellar qualifications, her brilliant performances in the debates, her years of experience (both as a two-time senator and Secretary of State), her 66 million votes? These accomplishments were apparently swallowed in the black hole of… what? Scarborough and Scheieffer’s sexism? The press’s long-standing dislike of the Clintons? An inability of the two pundits to look beyond their own self-satisfied, complacent nostalgia? Maybe all of the above.

Scarborough, as we know, was particularly hostile toward Hillary throughout the election, and I didn’t really expect any different from him. The more baffling reality is the legion of liberal commentators who, horrified as they may be by Trump’s behavior, never raise the possibility that maybe—just maybe—we should have elected her, instead of him. And at this point, it’s so obvious a conclusion that it bears serious reflecting on why we never hear it.

The most innocuous explanations are that the result of the election—or the fact that we seemingly can’t reverse it now—are too painful a realization to confront. The more disturbing possibility is that the notion that Clinton was an imperious candidate, who believed the presidency was hers for the taking and has stubbornly refused to admit her many failings, has become conventional wisdom among journalists. And with that “wisdom” has come an enduring need to punish her.

No matter what Clinton has done, the press has found some way to chastise her. When she engaged in a period of (well-earned) public retreat, she was accused of “sour grapes” and hiding “in the woods.” Then, when she left the woods and spoke her mind about the many factors influencing her loss—including (oh my!) misogyny—she got blamed for “blaming everyone but herself” and was told to disappear into the woods again.

The cruelty of these remarks was startling. “I just wish she’d go away,” Judith Timson, in theStar.com, reported a former friend of Clinton’s saying. After Hillary’s first post-election interview with columnist Nicholas Kristof at the Woman in the World Summit in April, RealClearPolitics’ A. B. Stoddard advised Democrats to tell Clinton that “she’s done enough damage and it’s time to pack it in” and ask her to “keep her rehabilitation journey as far away from their own as possible.” After a second interview with journalist Christiane Amanpour in which Clinton owned “absolute personal responsibility” but also cited Nate Silver’s research into the impact of James Comey’s October 28 revival of the “email scandal,” Gersh Kuntzman, in the New York Daily News, told Clinton to “shut the f— up and go away already.” Vanity Fair’s T. A. Frank accused Clinton of being “not just a nuisance but a hindrance” to the Democrats achieving coalition; his piece (wickedly alluding to Dylan Thomas’s poem) was entitled “Can Hillary Clinton Please Go Quietly Into the Night?”

Let’s pause here and note that Hillary Clinton won the popular vote by three million votes and remains cherished by millions of ordinary people. Yet the media still appears to be in the grip of what some have called “Hillary Derangement Syndrome.” The syndrome is double-barreled. On the one hand, during the election, Hillary’s every move was presented as possessing enormous power — much more than she (or any individual human being) actually has. Her vote, apparently, was responsible for the war in Iraq. She was the mastermind behind the crime bill of 1994 (when she was First Lady, and didn’t even have a vote.) As secretary of state—an office she left in 2013—she was responsible for the rise of ISIS. And her decision to rely on a private server put the United States at constant risk of a foreign enemy laying hands on classified material. (In fact, her server is just about the only official’s server that wasn’t hacked.)

That narrative got a journalistic seal of approval from Jonathan Allen and Amie Parnes, whose book Shattered went on sale in April (a week after my book came out) and quickly became the “go-to” explanation for Clinton’s loss. The book received excellent reviews, and continues to be a bestseller despite remarkable tunnel vision on campaign bickering and a few strategic mistakes. Allen had previously written one of the most astute examinations of the biased “Clinton rules” that guide media coverage in the direction of constant—and usually unwarranted—suspicion of Hillary; it was striking to me, then, that Shattered had not a word to say about media responsibility for Clinton’s email trouble.

Then came Bernie Sanders’ constant post-election criticisms of Clinton’s failure to address the problems of the “working class” (read: white, male, rural) voters, an explanation that Democrats eagerly embraced, desperate to find a scapegoat for their loss. “Look,” Sanders said in January to NPR, “you can’t simply go around to wealthy people’s homes raising money and expect to win elections… [T]he Democratic Party has been not doing a good job in terms of communicating with people in cities, in towns and in rural America, all over this country.” That “Democratic Party” was simply a code for Clinton and her followers became clear (if it wasn’t already) when both Sanders and Joe Biden suggested that they would have been better, more electable candidates than Clinton. A bit later, Senate Minority Leader Chuck Schumer joined the self-anointed working-class hero squad on the Hillary Blame Bus, telling The Washington Post that “When you lose to somebody who has 40 percent popularity, you don’t blame other things—Comey, Russia—you blame yourself.”

Every time Clinton opened her mouth to talk about the election, she was accused of passing the buck. “Hillary Clinton’s Blame Game” read the ticker on MSNBC’s First Look the morning after her interview with Kara Swisher and Walt Mossberg at Code Conference, in which Clinton delivered a brilliant dissection—well before the mainstream media got to it—of how the Internet had been weaponized during the election cycle. Later in the day, Greta Van Susteren described her as “bitter,” and Andrea Mitchell, clearly pained to admit that Hillary had made some astute points, was quick to point out that Clinton was still “not blaming herself.” Watching Mitchell concede that gendered double standards may have been in play—“She feels… um… and I think the data supports it”—was like watching a child being forced to eat her brussels sprouts. “Feels”? “I think”? Why so circumspect, Andrea? You certainly weren’t when you harassed Clinton over her private server, and continually chastised her—as did much of the mainstream media—for not “apologizing.”

That “she didn’t apologize” soon enough or extravagantly enough is Shattered’s entire diagnosis of why the email “scandal” continued to dog Clinton. “For months, she tried every approach but confession and contrition,” write Allen and Parnes, remaining in “denial” about the “fact that she had not told the truth about not sending or receiving classified information” and instead castigated her staff in a “severe, controlled voice” that “crackled” through the telephone line for not “burying this thing.” In fact, as I demonstrate in chapter 5, Clinton had told the truth. James Comey himself admitted that under questioning by Congressman Matt Cartwright, who produced a copy of a State Department manual, according to which the emails in question were not properly marked — just as Clinton had been saying. But forget the facts of the matter; just give us that “contrition”! Won’t you bow down and “confess” all — and then perhaps we will forgive you your sins.

Unlikely. After every Clinton interview early this summer, and despite her taking responsibility for the mistakes that she had control over, commentators berated her for blaming everything except herself. It’s come at us from both the right, predictably—in a particularly vicious op-ed for The Wall Street Journal, Peggy Noonan accused Clinton of lacking “remorse of conscience” and described factors such as Russian interference and Comey’s role as “alternative facts”—but also from the supposed “center”: In a CNBC piece, deceptively titled “Hillary is Right! Her Bad Decisions Aren’t the Reason She Lost to Trump,” Jake Novak went on to say that she lost the election not because of her (“bad, bad”) mistakes—or any of the other reasons she’s given in her interviews—but because she has “the per- sonality of a perpetual loser.” The same day, Steve Kornacki (who apparently isn’t consulting data the way he was once famous for) complained that Clinton was behaving like a “victim” instead of taking responsibility for her actions.

Blaming Clinton, despite increasing evidence of the many external forces that assaulted her campaign, has become so entrenched a narrative that it’s virtually impossible to argue against—as I do in this book and as I’ve done in interviews—without being seen as a Hillary shill. I’ve even been accused of being on the Clinton’s payroll, and numerous interviewers, instead of asking about the arguments of my book, have tried to convince me of the error of my pro-Clinton ways. One internet interviewer accompanied the visual of me with the header “Guest Puts Blame on Everything Except Clinton Herself.” Then there was the radio host who spent half an hour trying to get me to admit that Clinton had run an incompetent campaign (after the show, he confided in me, “I guess you can tell I don’t like her much.” Duh.), and another one who lectured me on his ideas rather than interviewing me about mine, and chastised me for “not admitting that [Hillary] was a weak candidate.”

But it’s not only the election loss that Hillary is blamed for. As I write this, Harvey Weinstein’s sexual abuses have become public knowledge, and multiple news stories are blasting away at Clinton for having taken donations from the movie mogul. There have also been accusations that she knew about Weinstein’s behavior but remained “silent.” (It’s not enough that she “enabled” her own husband; now she’s protecting another abuser.) “Why didn’t she come forward earlier?” reporters asked when, ve days after the Weinstein story broke, Clinton made a public statement of condemnation. They all seemed to forget that Clinton had “come forward” about Trump — and small good that did her. 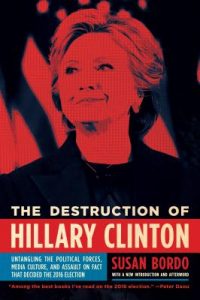 The Destruction of Hillary Clinton is out now in paperback. Buy your copy here, or at your neighborhood independent bookstore.