The Klencke Atlas, a collection of forty-one extremely rare wall maps, is one of the largest books ever printed. Produced in 1660, a time when the physical size of a book was thought to reflect its import and intellectual depth, the atlas, an attempt to record all the geographical knowledge of its time, measures five feet nine inches tall, and nearly seven feet across when open.

In a conversation with Allison Meier of Hyperallergic, Tom Harper, the lead curator of antiquarian maps at the British Library, summarizes the atlas’s history:

The Klencke Atlas is the British Library map collection’s jewel in the crown. It was made for Charles II and presented to him in celebration of his restoration to the throne of England — in May 1660, following the English Civil War and Commonwealth. It was presented by the Dutch sugar merchant Johannes Klencke who possibly hoped to win trading concessions in England; there’s a map of the Dutch colony in Brazil in the atlas, where the sugar plantations were based. 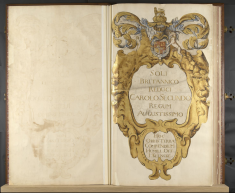 The dedication of the Klencke Atlas reads: “To the British sun, the restored Charles the Second, most august of kings, J. Klencke offers in humility this compendium of the world’s land.” Via the British Library.

But convenience was not a selling point in the seventeenth century. The owner of the Klencke, or any similarly oversized book, would need a team of workers just to pull it off the shelf. Turning those pages is no idle feat.

The digitization of the atlas, then, was no small task. Undertaken earlier this year by the British Library, the process, documented on video (see below), required a group of people working together to carefully wheel the thing in (the atlas is outfitted with two wheels, for convenience) and then secure it on a platform where high-resolution photographs of its contents could be taken. In addition to being one of the largest books in the world, it is also one of the most fragile.

The hard work was most definitely worth it. For the first time ever, the maps that make up the Klencke Atlas (some of which there are only three known copies left of) can be appreciated and studied by anyone with access to a computer, as opposed to just Charles II and a few lucky librarians. You, for example, can dive deep into the Klencke right here, right now. And you should: it’s a beautiful thing.