What would give eBooks the SAME value as physical books?

Author Nathan Bransford recently did an unscientific poll to determine what people thought you should pay for the eBook version of a $25 hardcover book. Here’s his results: 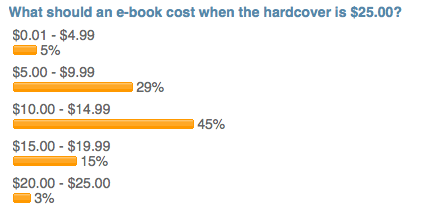 In response, GalleyCat has asked for various opinions on the best eBook price points. At one end of the spectrum, author John Locke, who recently joined the million Kindle club at Amazon, argues:

When I saw that highly successful authors were charging $9.99 for an e-book, I thought that if I can make a profit at 99 cents, I no longer have to prove I’m as good as them … Rather, they have to prove they are ten times better than me.

Generally e-book editions of hardcover new releases will be priced between $14.99 and $12.99; a few books will be priced higher and lower. This is a tremendous discount from the price of the printed hardcover books, which generally range from $28.00 to $24.00.

Both arguments are perfectly valid since they’re discussing very different types of books. Locke’s titles are the genre titles that would previously have been purchased as mass market paperbacks, whereas Sargent is talking about buying eBooks of books that are new and only available in hardcover.

Still, the underlying question of how digital value relates to physical book value is an interesting one (as are most questions related to value) and will play a critical role in the future of the publishing industry. What ALL these opinions prove is that people value digital content far less than physical books. For example, it’s quite astonishing that an iPhone app like our own The Hollywood Economist, which contains the entire book PLUS video footage and additional features is priced at $4.99 while the paperback book costs considerably more. Clearly extra or superior content is not enough to make a digital book rival a physical book in terms of value.

What would an eBook or book App need to contain to make it equally valuable to a physical book? Here is an unscientific poll of our own. Naturally, this doesn’t contain scratch the surface of the possibilities for digital books, so I’d also love to hear reader’s comments and suggestions.