What made this year’s Man Booker International winners so damn notable? 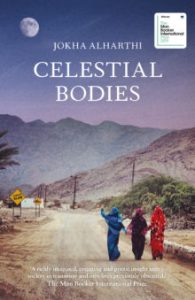 The winner for the Man Booker International Prize, literature in translation’s biggest award, was announced on Tuesday as Celestial Bodies by the Omani writer Jokha Alharthi and translated by Marilyn Booth. For a few reasons, this iteration of the award was particularly notable. Here’s what you need to know:

• Celestial Bodies is the first novel by a female Omani writer to be translated into English, and its epic. According to the Man Booker website:

[Celestial Bodies] tells of family connections and history in the coming-of-age account of three Omani sisters. It is set against the backdrop of an evolving Oman, which is slowly redefining itself after the colonial era, at the crossroads of its complex present.

• It was a female led award this year. Not only were four out of the five shortlistee writers women, but so were all the translators. An unprecedented ratio for a non-gender specific award. Better luck next time, fellas.

The Unmanning of the Booker Prize