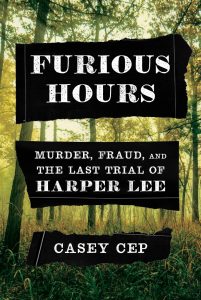 The headline says it all—Harper Lee once wrote (or at least tried to write) a crime novel. Or at least attempted to. In the recently released Furious Hours, the immaculate true crime narrative by author Casey Cep about an Alabama preacher accused of serial murder, Cep was able to unearth some interesting facts about the famed author’s failed attempt.

Famous and rich from the success of To Kill a Mockingbird, Lee suffered from years of writer’s block. She was always at work on something but no one had a clue what. Cep paints a sad and unfortunately familiar picture of the author struggling against the pressure that comes from unexpected fame:

Lee’s friends worried about her drinking and her emotional volatility, while everyone worried about her struggles with writing. When she discussed her work, she sounded like some self-mortifying mystic, valorising suffering and solitude … “It’s sitting down and doing it whether you think you have it in you or not. Every day. Alone. Without interruption. Contrary to what most people think, there is no glamour in writing. In fact, it’s heartbreak most of the time.”

It seemed troublesome until Lee caught wind of the story of Reverend Willie Maxwell, a preacher thought to have killed five members of his family to collect insurance money. History seldom plays out so seamlessly, and Maxwell’s proved to be no different. He was shot and killed at his stepdaughter’s funeral, the very stepdaughter he was accused of murdering. Lee found it compelling, the material of a perfect True Crime novel. It became her new obsession. It might have been called The Reverend, but after amassing mounds of evidence and research, Lee would find difficulty turning it into a book:

She could not get traction in the prose. That’s a common enough problem, of course; nothing writes itself, and no matter how many pages a reporting trip yields, the one that matters most always starts out blank. Everyone told Lee that the story she had found was destined to be a brilliant book. But no one could tell her how to write it.

Cep’s examination of Lee’s pursuit is a solemn showcase for the tireless writer, the sort of writer facing demons and doubt, doing her absolute best not only to meet readers expectations but also her own. It’s a true shame she never did.