What about children’s books makes us “easy to manipulate”? 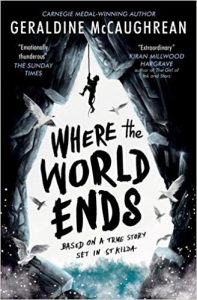 Last week the British children’s writer Geraldine McCaughrean took home the Carnegie Medal for her book Where the World Ends.

Upon receiving her country’s most prestigious children’s award (which is selected by librarians), McCaughrean spoke to the state of young people’s literature, and its impact on the citizenry.

As Alison Flood reports for the Guardian, McCaughrean didn’t offer a particularly optimistic picture. Instead, she warned that the dumbed-down prose of writing for children was cultivating “an underclass of citizens with a small but functional vocabulary: easy to manipulate and lacking in the means to reason their way out of subjugation.”

Publishers, McCaughrean says, are to blame for this imposition of simple, accessible writing on their authors, and by extension their readers. Just beneath her statement lie a number of difficult questions: are publishers meant to find their audience and then meet them there? Or are they meant to give their readers something worth reaching for? Does raising expectations at the lower levels of education raise all students up together? Or does it threaten to further alienate those already disadvantaged learners?

I fear the words in my early childhood readings were too simple for me to now know the answers to these questions, but I like where McCaughrean’s head is at. She suggests that increasing the depth and rigor of children’s literature is not really about getting our young people snootier educations per se, it’s about teaching the youngest among us how to confront the unknown, and to critically reflect what they find there.

Too often, at least in this country, we think of college as the time to come into our own as critical thinkers — as if the knowledge base we’d gained up to that point was somehow value neutral. What McCaughrean wants is middle schoolers with increased critical thinking skills and hunger for knowledge, creating a soon-to-be voting bloc a bit less susceptible to the types of rhetoric and language politicians and media outlets use to frame (he says generously) key issues.

Encouraging a more vibrant literary culture among younger readers may also have the effect of eradicating the strains of anti-intellectualism that have infected both the US and the UK for decades, that has us favoring passion over reason — especially at the polls.