People of the internet! Let’s not mince words. It’s December again, and, somehow, you’ve still got a seemingly endless list of friends and family to buy presents for. No rest for the weary. We know, we know.

We’d like to help out, modestly, and that’s why we, the human persons of Melville House, have come together to share our 2017 staff recommendations with you. These are the books we’re giving to everyone we couldn’t scare off this year, and we humbly invite you to do the same.

One part Heart of Darkness, one part James Ellroy noir, and one part Ursula K. LeGuin fantasy, Infinite Ground takes you on a psychological tour of encroaching arboreal madness as a detective goes into the jungle to find a missing person. It’s hard to tell what’s real in this story, but by the end you’ll be unsure if reality even matters. Martin MacInnes has written an eerily fun, glowingly dark, and profoundly enlightening novel. Warning: reading it once might not be enough.

There’s a reason A.S. Patrić won Australia’s most prestigious literary prize for this novel. It is both heartbreaking and illuminating, capturing the experience of a married couple who fled Sarajevo to escape the horrors of war, and their attempt to move forward with their lives and their relationship. It’s impossible to read Black Rock without thinking about the current world refugee crisis, and it provides an essential and often-neglected perspective, written by an author who was a refugee himself. A necessary and beautifully written story.

What do Egyptian Pharaohs, Dickensian nurses, and deconstructionist philosophers have in common?Anyone whose ears perk up at the question will be overwhelmed with delight at Marion Rankine’s Brolliology, a beautiful, funny, warm-spirited, and genuinely fascinating investigation into that humblest and, in some ways, least probable of inventions: the “movable roof” we know more commonly as the umbrella. An exhilarating read, and a beautiful object to boot. I love this thing.

Marina Drukman (art director):
Why I Am Not a Feminist by Jessa Crispin

Jessa Crispin has some very strong opinions, and you may not agree with everything she says. That’s OK — she doesn’t care whether you like it or not. She doesn’t care if she makes you uncomfortable. Jessa is a real badass. And also — she can write. Really write. Articulate, smart, funny, insightful, provocative, angry, in-your-face. And true. She declares a new wave of feminism: “For too long, feminism has been moving away from being about collective action and collective imagination, and toward being a lifestyle. Lifestyles do not change the world.” There’s never been a better time to read this book.

200 million people watch the Eurovision Song Contest each year across the world. It was only broadcast in the US for the first time in 2016 but the contest started in 1956 and is one of the longest running TV shows ever. As a Brit I have watched it every year since I can remember, loving the kitschy costumes and catchy (and often naff) songs. But as I got older I couldn’t fail to notice how political it was, and continues to be. And this is what Chris West’s Eurovision! is all about. Because, in fact, Eurovision can tell us a lot about the changing face of Europe. It’s much more than just a song contest: a barometer for social, cultural, and political change across the continent.

You should watch Eurovision. You should read the book. Not only will you be entertained, you will learn a hell of a lot. And fyi, if you like lame nineties rap, check out my favourite UK entry, from 1995. It is awesome. It came tenth, which the UK can only dream of these days…

Ryan Harrington (editor):
The Man Who Designed the Future by B. Alexandra Szerlip

Dubbed “The Grand Master of Modernism,” “The Inventor of the Jet Age,” and even “little Leonardo da Vinci,” Norman Bel Geddes is the greatest American designer you’ve never heard of. This book shows how a high school dropout came to lay the groundwork for twentieth century design: from cocktail shakers to stadiums, bullet trains to entire cityscapes. Szerlip tells the story of an era from the roaring twenties to the postwar boom, including all of the luminaries—Charlie Chaplin, Frank Lloyd Wright, Alfred Hitchcock—pulled into Bel Geddes’s gravity along the way.

Antifa was the word of the year, and maybe the most misunderstood to boot. But after Charlottesville, it became clear we needed some definitive ideas about how to stand up to Nazis and the terrifying rise of the violent right in the US. Which is what made Mark Bray’s smart history of the anti-fascist movement and its tactics—starting with the brave souls who stood up to the original Nazis and Mussolini’s Fascists—such an important and fascinating read, under heavy discussion in the media … and, for Melville House, our biggest book of the year.

This riveting 1947 novel is based on the true story of a working class husband and wife in wartime Berlin who decided they just couldn’t abide with the Nazis and they had to find some way to stand up to them. Their simple rebelion becomes the stuff of spine-tingling suspense that can’t help but make you wonder: What would you do in their situation? As we see the right rise in the world today, the question is sadly as relevant as ever — which makes the stirring conclusion to this book all the more inspiring. It’s the biggest selling book at Melville House for a reason. 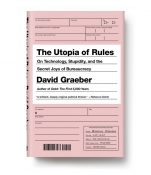 Sarah Healy (intern):
The Utopia of Rules by David Graeber

One of the founding organizers of Occupy Wall Street, David Graeber seamlessly entertains while enlightening us in these essays about the ways in which we move, work, interact, and enjoy ourselves in a web of markets, paperwork, regulations, and red tape. From Big Banks to the CIA to literature and even Batman, Graeber’s sharp eye for the absurd controls present in mundane life is a much needed wake up call.

The Queue is a dystopian novel that follows the rise of a centralized authority after a failed popular uprising in an unnamed Middle Eastern country. Basma Abdel Aziz, who lives in Cairo, wrote it after seeing a line of people in front of a closed government building. It’s dark and chilling in the same way the best dystopian novels are. Not only is this book beautifully crafted with compelling characters, but Basma herself is an incredible human — she’s also a journalist and visual artist, and works with victims of torture. All of her knowledge comes together in this timely portrayal of the dark and manipulative ways in which a government can exercise power.

Valerie Merians (co-founder, co-publisher):
A Cititzen’s Guide to Impeachment by Barbara A. Radnofsky

Get the low-down, people. It’s coming. It may be slow, but it’s coming. So be the first on your block to know what “high crimes and misdemeanors” actually are! Wow your friends with your insight into the Founding Fathers’ intentions! Learn how to make the very simple case for presidential impeachment today! Don’t wait! The Founders had just bested Mad King George, and they knew what they were doing. In clear and simple style, Barbara Radnofsky explains the history and the how-to of impeachment. Don’t let another Tweet go by, get your copy today!

Off the west coast of Scotland, Simon Sylvester has created an island where gossip swells with the tide, folklore is as changeable as the weather, and uncertainty comes in like a mist. The bleakness of Sylvester’s Bancree Island—where mysterious disapperances have rekindled talk of selkies, legendary monsters capable of changing between women and seals—only adds to the air of wonder surrounding the mysterious events of The Visitors. Note: Best read when it’s overcast.

Julián López’s slim A Beautiful Young Woman feels like that moment between dreaming and waking up: the past and present mix together in a languorous mist, you’re not quite sure what’s real and what isn’t, and you’re paralyzed by the images in front of you. Beautifully, perfectly translated by Sam Rutter, the novel is retelling of a man’s relationship with his mother, who disappears when he’s just a young boy — making her more myth than real person. I love how Kirkus Reviews describes the book, because it’s just so true: “It’s been said that memory is a poet — if so, this novel represents some of its most gorgeous and incandescent work.”  Lopez’s writing is poetry come to life, and a reminder that the past is present in all we do.

It’s been a messed up year. Luckily, we have George Lakey’s Viking Economics, out now in paperback with an essential afterword addressing the shocking political developments since Trump’s election. In it, Lakey gives a stirring account of how a broad coalition of citizen activists mobilized democratic power in Norway and won for themselves the kind of robust, dignified, and caring society we so lack these days in our own country. A must-read for those struggling to create a sustainable and compassionate future for America.

You know how sometimes you just want to be angry, to wallow in your rage, unbothered by pesky do-gooders and happy optimists? Well, 2017 was the official Year of Angry Wallowing, and there’s no better book to wallow in than Sady Doyle’s Trainwreck. Even better: the paperback has an added chapter for extra election-reflection wallowing. Given the current status of our political hellscape, and the many questions and hard looks in mirrors we’re collectively taking on the heels of the #MeToo movement, Trainwreck is a timely, incisive, and funny-sad history of the blame women face for, basically, being human while female.

This one’s an all-time favorite. Perfect for fans of Karan Mahajan’s The Association of Small Bombs and Colum McCann’s Let the Great World Spin, Margot Singer’s Underground Fugue is set against the bombing of London’s transit system in July 2005 and interweaves the stories of four characters dislocated by shock waves of political violence, personal loss, and, eventually, betrayal. And Margot is exquisite, line by line. Don’t just take my word for it though: Geraldine Brooks called Underground Fugue “extraordinarily accomplished” and “a pleasure to read from beginning to end”; Allegra Goodman described it as “beautiful”; and Richard Bausch said it “swept [him] away.” This is one of those books that stays with you long after you’ve finished.