We’re remembering Nora Ephron on her birthday — with a $.99 e-book 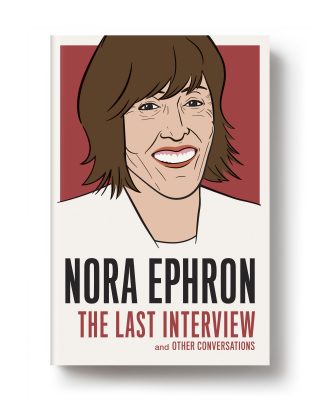 You may have read here or here that we Melvillians are big fans of Nora Ephron.

Whether it be on the silver screen, the newspaper, the novel, or the stage, Ephron spoke a truth that was emotional and raw. In a time when our government rattles with scandal, journalists are treated with disdain by the ruling party, and leakers seem to be the only hope for honest information, Nora’s life and words provide great inspiration.

She was a self-proclaimed wallflower, observing and commenting with a careful eye. But beyond her reportage and a penchant for writing on relationships that speaks to both men and women, her contributions to collective media were so vast that journalist Kerry Lauerman wrote in 2010 that “her cultural influence is so elemental you’re not always even are of it; she’s like hydrogen.”

Nora Ephron would have been seventy-six today, so we thought as her birthday gift to the world we would lower the price, for today only, of her Last Interview e-book to $.99.

Sure, we could keep despairing over politics. Maybe we could even get a dollar coffee at the bodega. But I, for one, would rather read some of Nora’s gems:

On an iconic movie moment in When Harry Met Sally

“The orgasm scene was, of course, started by Rob and Andy and me, made into legend by Meg Ryan (whose idea it was for Sally to have the orgasm at the end of the scene), and by Billy Crystal (who thought of the line ‘I’ll have what she’s having’). I learned in the course of that movie that if an actor wants to change something for the better, you would have to be a fool to object.”

On transitioning to screenwriting

“The only way to learn is to keep doing something new, and, if you’re lucky, learning with people who really know how to do it. ”

Of course, I’d be remiss if I didn’t include some of her movie magic. But after watching this clip, don’t forget to buy Nora Ephron: The Last Interview for $.99. Nora is worth remembering, just like an old friend.

Sally: Well, maybe it just means that we should remember that we forgot them or something. Anyway, it’s about old friends.