We’re doing everything we can to get Antifa: The Anti-Fascist Handbook out soon

A crowd gathers at the White House to protest the Charlottesville rally. Photo by Ted Eytan, via WikiMedia Commons.

Here’s what we know. This weekend, the world’s attention was claimed by the vile spectacle of a major white nationalist rally held in Charlottesville, Virginia. It culminated in a terrorist attack that killed one person, and injured many more. Counter-protestors came to confront the nationalists, many of them part of the anti-fascist movement known as antifa. The prominent activist and Harvard philosophy professor Cornel West, who was among the counter-protesters, came under attack by a mob of nationalists. He later said, “We would have been crushed like cockroaches if it were not for the anarchists and the antifascists who approached, over 300, 350 antifascists.” A black clergyman, Osagyefo Sekou, also targeted by the crowd, agreed: “Antifa saved my life.”

In response to the violence, the president of the United States offered a statement in which he condemned “this egregious display of hatred, bigotry and violence on many sides — on many sides.” But there are not, of course, many sides to racial hatred. That’s a pretty classic right-and-wrong-side scenario. And then yesterday, after briefly appearing to have walked back those sentiments, a defiant Trump spoke to the press again, to stand by his original comments. It was bizarre: he openly compared the Confederate leaders Robert E. Lee and Stonewall Jackson to George Washington, and told the press that he had watched the incident “much more closely than you people watched it.”

But underneath the bewildering style was an attempt at substance: the president—who keeps several top advisors linked to white nationalism—consistently referred to the “alt-left,” whom he described as “very, very violent.”

Who did he mean? Was he describing the same crowds that had protected Cornel West? The people who showed up in Charlottesville in the thousands to confront barbarism head-on — who were they?

In large part, they were antifa.

Antifa has been around for as long as there’s been fascism, and questions about who they are and what they stand for have never been more urgent.

So we’ve made a decision. We’re working hard to release a handbook of anti-fascism as soon as we possibly can. The thirsty politics of this overheated moment won’t wait.

The book is Antifa: The Anti-fascist Handbook by Mark Bray, a historian of human rights, terrorism, and political radicalism, and an organizer who helped initiate Occupy Wall Street and other social movements. He currently teaches at Dartmouth College.

In the coming days, we’ll be offering updates about the work of crashing the book on a highly accelerated schedule, which (oh, believe us) is not easy. But this work in s a big part of why we exist as a publishing house. The upshot is that we’re aiming to have it in stores next week. You can bet you’ll be hearing a lot about it. 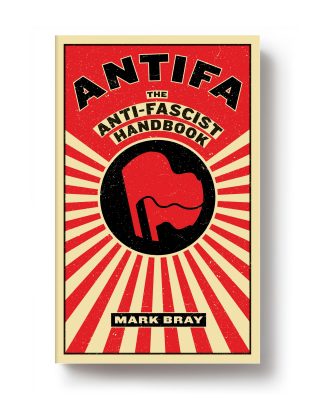 Antifa provides a compelling, meticulous history that details the early days of the movement—when it was formed almost simultaneously with fascism itself, to fight Hitler and Mussolini—up to the present day.

It also acts as a handbook to tactics and strategies, the key organizations and core philosophies of the movement, suggesting what role citizens can play today in combating the rise of the far right.

By drawing on his own fifteen years of experience working within the movement, and as a historian and lecturer, as well as through interviews with dozens of international and American antifa organizers, Bray presents a smart and gripping investigation that is also a one-of-a-kind look inside antifa today — thus offering insight into the growing, but insufficiently understood, resistance fighting the alt-right.