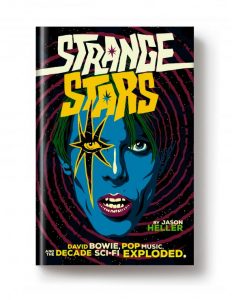 Some books are just candy.

It takes all kinds of books to make the world go round: discursuses on badassery, histories of world-shaping forces, modernist fever-dreams, far-out beardy shit. Sometimes a book comes out that’s just pure fun, an exuberant dash through an interesting subject by someone deeply immersed in it. Such, I say unto you, is Jason Heller’s Strange Stars: David Bowie, Pop Music, and the Decade Sci-Fi Exploded, which we released last month to supernovas of excitement.

It’s easy to love a book that features Sun Ra saying this to a classroom of Berkeley undergrads:

One happy effect of reading the book is that, as Jason traces out the dynamic symbiosis of pop music and science fiction in the culture of the seventies, a personal hit parade of chromium favorites unfurls in the mind, as one’s taste and memory conjure a procession of beloved sci-fi videos.

Everything about this Afrofuturist Egypto-Cali fantasia is a total fucking delight. If you’ve ever ridden one of those Star Tours things, think “Canubis” is an excellent idea for a word, or dream of making it on the light blue box, you’ll love it. Also, it is an honor to be of the same species as Stevie Wonder.

Robots Are Un-American — Solange (but not that Solange)

The beyondness of this is considerable. “They must never win: robots are un-American.” That this has yet to become the national anthem of the United States proves we’re a nation of philistines. That last chorus will burn your face off.

The Sailor in Love With the Sea — The 6ths

Stephin Merritt, best known for fronting the Magnetic Fields, has written some of the most outrageously beautiful songs in existence. His tongue-twister-obsessed side project The 6ths consists of songs Merritt writes to be performed by a constantly-rotating cast of others. In the case of The Sailor in Love With the Sea, that other is Gary Numan. As Jason Heller notes, “Numan wasn’t about connecting with people. His automaton-like persona and songs—sleek, shiny, and shiver-inducing—did precisely the opposite.” The lyrics could be taking place anywhere, but the silvery timbres and shimmering circuits Numan runs them through make clear, sez me, that we’re far from earth.

Janelle Monáe obviously needed to be on this list, and gives us a huge number of songs to choose from. Q.U.E.E.N. has much to recommend it — for example, the video shows what happens when a collection of great rebels from across history, frozen for an exhibition by the Time Council, get unleashed and cause trans-epochally funky mayhem. It is everything.

This has nothing to do with the exceedingly wonderful Kraftwerk song (or its worthy Covox cover). Quietly important but ill-fated, Zapp were the first band to ask an important question: “Could it be your face I see on my computer screen?”

Synthesize Me — The Space Lady

The Space Lady is Susan Dietrich Schneider, a legendary San Francisco street musician known for her gentle and poignantly cosmic intelligence. (Her cover of the Peter Schilling Major Tom is not to be missed.) Synthesize Me is one of her signatures and a lovely piece of nebular radiance. “Your eyes are set on stun / And you are hotter than the sun.” Aw.

Also, the title could be a homage to Bruce Haack’s resplendent Program Me (Jason Heller, aptly: “Kafka-meets-Kubrick”).

Bonus Track: My Soul is My Computer — Horace Silver

Pianist Horace Silver, who died four years ago today, was one of the greatest musicians ever born on earth. But the early seventies, when he released a three-part series of records called The United States of Mind, weren’t his best period. Still, My Soul is My Computer, with vocals by Salome Bey, is better than most things.