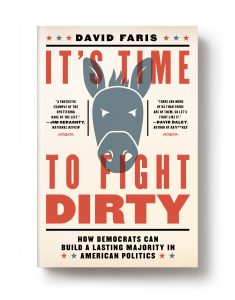 Melville House author, political science savant, and world’s most delightful rabble-rouser David Faris is a little busy this week, so today we thought we’d post a “hear me out” on his behalf.

On Tuesday, John Myers at the Los Angeles Times reported that Silicon Valley venture capitalist Tim Draper’s proposal to divide California into three states (“CAL 3”) has received more than enough signatures to be eligible for the statewide ballot on November 6. This proposition—which Myers goes out of his way to describe as “controversial,” “far from certain,” and “longshot”—might ring a bell if you’ve read It’s Time to Fight Dirty, where Faris addresses Draper’s 2016 Six Californias plan. That effort failed, at least in part, because Draper’s vision “was for the state’s Twitterati and Googlarchs to have their own little archipelago of laissez-faire capitalism in San Francisco and San Jose, while the rest of the state is divided nonsensically into a series of farcical shapes and sizes.”

It’s . . . not confusing that this agenda didn’t get a lot of support.

Faris’s proposal, on the other hand, would split California into seven states and explode Californians’ representation in the senate from two to fourteen almost certainly Democratic seats:

Barack Obama beat John McCain in California by twenty-four points in 2008 and Mitt Romney by almost twenty-three points in 2012 even as his margins were down in many other places in the country. Then in 2016, Hillary Clinton carried the state by an astonishing thirty points. You can see just how bad things have gotten for the GOP in California by looking at Orange County, the one-time conservative stronghold. In 1992, George H.W. Bush beat Bill Clinton in Orange County by almost thirteen points even as he was losing the state by thirteen. In 1996, [Bob] Dole bested Clinton there by almost fourteen points. When Hillary Clinton carried Orange County in 2016 by 8.6 points, she was the first Democrat to win there since FDR in 1936. While the radioactivity of Donald Trump may have played a part, the county is at this point a tossup at worst for any generic Democratic presidential candidate.

The increasing progressive tilt of Orange County means that California could probably be divided into seven pieces, with all of them having a Democratic lean. Each of these seven new states would be centered around a major California metropolitan area and Hillary Clinton would have carried them all easily. As you can see from this map, all seven entities would have access to their strange ocean, which is too cold for normal people to swim in. At the top would be the new state of Sacramento, including the rural, Republican-leaning counties of the state’s northernmost expanses. Sacramento alone will provide the Democratic margins to ensure that it remains in the donkey’s clutch. Just below it on the left will be the state of San Francisco, a compact, wealthy entity including Marin, San Mateo, Contra Costa, Napa, Solano, and Alameda counties. This state would be so Democratic it would have elected Hillary Clinton president even if she was caught hand-delivering satchels of uranium to Sergey Kislyak. The state of San Jose would be comprised of coastal Santa Cruz County and eleven additional counties stretching to the Nevada border. Democrats could run Colin Kaepernick for governor in this state and he would win by twenty points. The state of Fresno would include the coastal counties of Monterey, San Luis Obispo, and Santa Barbara as well as inland Fresno and four other counties to the Nevada border. Los Angeles would include Ventura, Los Angeles, and Kern counties, and would provide fake-election-in-a-dictatorship margins for Democrats. The state of Anaheim would be made up of Orange, San Bernardino, and Riverside Counties. Clinton would have carried this state easily by more than 211,000 votes despite the inclusion of traditionally Republican Orange County. Last but not least is the state of San Diego, comprising San Diego and Imperial Counties, another entity that would have gone for Clinton even if she had collapsed of exhaustion in a heap of classified e-mails documenting a torrid affair with Huma Abedin and forwarded carelessly to the president of the Iranian Revolutionary Guard Council.

Faris grants that this is all easier said than done—dividing California into seven states would be “by far the most difficult task of the ideas in this book” from a political, logistical, and financial standpoint—but “the total cost of creating seven new states would probably be less than the price tag of some mid-range Pentagon boondoggle like the Osprey, and definitely far less than the amount of money American spend every year on Hulu subscriptions,” Faris writes. “If the cost of progress is a few new university campuses, some drab government buildings, and a bit of revenue sharing between California’s successor states, then so be it.”

While we’re here, and while we’re on-behalf-ing, we’ll also do a little bragging. In a review for the Guardian on Sunday, Charles Kaiser calls It’s Time to Fight Dirty “a bracing polemic,” and adds: “American democracy could disappear altogether within our own lifetimes. Every one who wants to avoid that catastrophe must read this book.”

Looking at you, Californians.