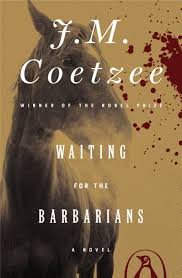 It’s coming. Can you wait for it? I can’t wait, but really, I have been waiting. Waiting for the Barbarians, the film.

The adaptation to J.M. Coetzee’s enduring magnum opus novel of a border town that descends into chaos while anticipating an attack by savages is, according to Ioncinema, one of  most anticipated releases of 2019 (#36 of 150!) Directed by Colombian filmmaker Ciro Guerra (The Embrace of the Serpent, Birds of Passage) in his first English-language film. Waiting for the Barbarians has a star cast including Robert Pattinson (Warrant Officer Mandel, Mark Rylance (the Magistrate), Gana Bayarsaikhan (Barbarian), and Johnny Depp (Colonel Joll), who, as Variety notes, is also co-producing the film through his company Infinitum Nihil.

While a small flurry of news about it went around last year, the film does not appear to have a slated opening date. One Robert Pattinson fan page (one of many) has the film due to appear in 2020. Until then, we’ll just have to keep waiting. At least those of us who have read the book. If you haven’t, now might be the time to do so.