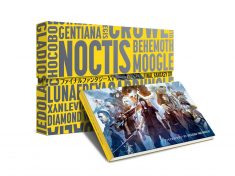 As many smart and talented people have said and written, video games are art. We’ve even said it on this blog. It took four years for Michelangelo to paint the ceiling of the Sistine Chapel, and it can take a thousand people, a hundred million dollars, and four years to make a blockbuster video game like Grand Theft Auto, Assassin’s Creed, or Call of Duty. While there’s almost no chance the murder sequences in those three games will stand the test of time like Adam’s god-touch, considerable artistic talent has gone into them.

As game art has evolved from primative early graphics, so too has the complexity of artistic expression within video games. In The Art of Assassin’s Creed Origins, published last October by Titan Books, we see how the initial sketches led to colored versions, which led to oil paintings… and, eventually, way down the line, those countless creative artifacts produced a complete game.

Appealing to a similar fanbase, The Art and Design of Final Fantasy XV, forthcoming from Cook and Becker, takes the video game art book to a new level. Weighing in at just over eleven pounds, with a trim size that recalls a piano bench (it’s 21” x 15” x 2.4”), the FFXV book more closely resembles a traditional art book than anything we associate with video games. This game took over ten years to make, with an open-world design that lets the player explore every square inch of this fictional land. Luke Punkett at Kotaku writes:

It’s all incredibly lavish, and for FFXV superfans it might be worth it, but you know, the book is fantastic on its own, so regular folks might just be happy with that. It’s heavy on full-width environment art, pencil sketches and carbon paper chocobos (there are even recipes for the game’s cooking), and I’ve loved going through the whole thing even though I care very little for the game itself.

At $170 for the deluxe edition, 220 pages of gamer love can make your coffee table sink even deeper into the carpet. But you’ll also see amazing art from the land of Eos, where our hero Noctis Lucis Caelum seeks to reclaim his birthright — the Lucian throne.

While that must sound ridiculous to non-gamers, it’s hard to deny how visually stunning the end result is. Though it’s unclear if the high-priced video game art book will become a staple of the market, it’s nice to see the detailed and elaborate work of video game artists brought to the printed page.