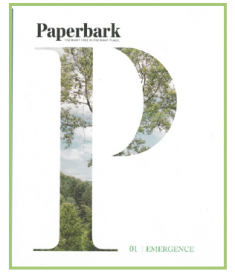 You ever hear the joke about the literary magazine publisher who couldn’t find a financial sponsor?

No, you haven’t, because trying to get funding for a literary magazine is no joke. This is why literary magazines come and go, sometimes after one issue. Paying contributors and printers and distributors can be an expensive endeavor. So it’s heartening to hear from the Daily Hampshire Gazette‘s Greta Jochem that the sponsorship has been secured for a new University of Massachusetts based eco-lit mag Paperbark.

The publication’s editor-in-chief, Rachel Berggren, a UMass sustainability sciences master’s student, told the Gazette, that Paperbark had found sponsorship from “the UMass School of Earth and Sustainability, the College of Humanities and Fine Arts, and the UMass library.”

Described by Jochem as a magazine that “brings together poetry, short stories, visual art, photography, excerpts from novels, and other creative work into one literary journal focusing on climate change and other environmental issues,” Paperbark launched last fall with an issue that included a narrative account of hurricane survival and a meditation on environmental activism. A second issue is currently in development.

You can read more about Paperbark here.