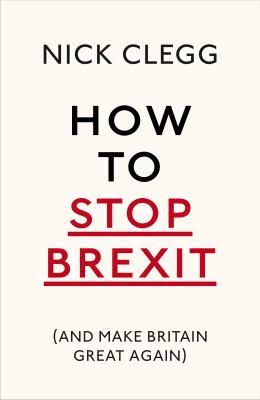 Well, who would have thought it. As the British prime minister, Theresa May, attempts to plough ahead with a hard Brexit, parliament has voted former Liberal Democrat leader Nick Clegg’s book How to Stop Brexit the best non-fiction book of the year. This all took place at at the 2017 Parliamentary Book Awards.

Stephen Lotinga, chief executive of the Publishers Association, said in an official statement when the awards launched, “These awards and reception aim to recognise the contribution publishing makes to the UK’s economy and society, while also celebrating the creativity of the people who are at the centre of politics.”

Clegg vocally supported the Remain campaign, and according to his publisher’s website his book “categorically debunks the various myths that have been used to force Brexit on Britain, not by ‘the people’ but by a small, extremely rich, self-serving elite, and explains precisely how this historic mistake can be reversed — and what you can do to make sure that it is.”

How to Stop Brexit won the secret ballot by only a narrow margin. It’s a blow to May’s continuing push to wrap up a Brexit deal as soon as possible, showing the unrest and disagreement in parliament and in her own party over exiting the EU. On Monday another kick was dealt to Brexit negotiations when May and European Commission President Jean-Claude Juncker failed to broker a deal after the Irish Democratic Unionist Party (DUP), who teamed up with the Conservatives after they only managed to win a minority holding in the last general election, were unhappy with the proposed future of the Irish border. Political unrest is on the rise.

Best political book by a non-parliamentarian was awarded to Jo Cox: More in Common. Jo Cox, an MP with the Labour Party, was murdered last year in the lead up to the referendum by fifty-two-year old Nazi Thomas Mair, who shouted, “Britain first” as he attacked her. The book was written by Cox’s husband, Brendan Cox. The Bookseller’s Lisa Campbell covered the award ceremony at the Houses of Parliament on Tuesday night, reporting that Cox said, as he accepted the award:

“My male colleague would write their memoirs… as I would look in the pictures (of the books) the only pictures of women were of their wives or the women working for them and nothing about that great time which was the women’s movement… I would run my finger down the index and I would not be in it. Like Sheila Robot, hidden from history. So I stepped into the world of writing my memoir which I was hugely delighted to do because it took me into the world of publishing and bookselling and I’m delighted it did.”

At the ceremony, Lotinga made his approval of the winners clear, saying, “All three winning titles make vital contributions to our thinking on important political issues, whether this is on the position of women in politics, by helping us come to terms with the tragic death of Jo Cox MP or by weighing into the divisive issue of our decision to leave the European Union.”

The Guardian’s Danuta Kean recorded the response of the Booksellers Association’s head of marketing, Alan Staton. Highlighting the topical nature of the winning books, he said, “They have become even more so in the last two or three weeks, as Brexit has been in the news and Brendan Cox responded to Donald Trump posting Britain First videos on Twitter.”

Not only are the winning books extremely current, calling for fight and change and addressing discontent, but they demonstrate a strong showing against far-right policies and ideas. In grim times, this feels hopeful.