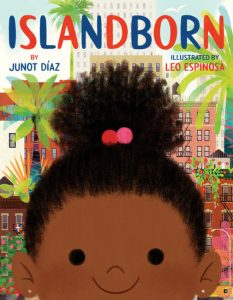 Not-exactly-prolific (but very successful and cool!) author Junot Díaz (The Brief and Wondrous Life of Oscar Wao, Drown) has written a picture book, reports Alexander Alter in the New York Times. Entitled Islandborn, the author’s first children’s book was written to fulfill a promise he made to his two goddaughters some two decades ago, when he swore to them that, someday, he’d write a book starring Bronx-dwelling Dominican girls like them.

The resulting book tells the story of Lola, a young New Yorker living in Washington Heights, who can no longer imagine the Dominican Republic, where she was born:

When [Lola] is given a school assignment to draw a picture of the place her parents came from, she can’t conjure an image of the island, which she left as a baby. So she asks family members about their memories of home. Some relatives share joyful stories, while others recall heartbreaking and frightening moments from the country’s dark past. Lola draws pictures and begins to assemble her own version of the island from the conflicting fragments of her family’s stories.

The book didn’t come easily. “It’s a lot harder than it looks to write a story for kids,” Díaz told the Times. Namrata Tripathi, the editorial director at Dial Books for Young Readers, adds that “a picture book is like a primer on how to be a human. For a novelist, it’s perfect, because isn’t that what a lot of novelists are exploring in their work, anyway?” True, but by that definition, every book is a tall order, a daunting task. It’s no wonder Díaz, who himself admits to being prone to procrastination, took his sweet time.

That said, it’s likely the book wouldn’t have happened at all without some additional encouragement. Here’s how it went down:

A year and a half ago, Mr. Díaz was driving in Miami with a friend and her young daughter, when the little girl became restless and demanded a story. Mr. Díaz obliged and began telling her a tale he made up on the spot.

As the story grew more elaborate and detailed, Mr. Díaz’s partner, the author Marjorie Liu, who was also in the car, recorded a video on her cellphone. She later wrote out a transcript of the story and urged him to publish it, but Mr. Díaz didn’t think it was good enough. “I was my typical curmudgeonly self,” he said.

Next, the story made its way from Liu to Nicole Aragi, Díaz’s agent, who can be forgiven for getting excited about the idea. The extemporaneous story from the car ride, ultimately, was ditched. But the idea had been hatched. And eventually, Díaz sat down and wrote the words that became Islandborn.

Islandborn will be published in March 2018 by Dial Books for Young Readers with artwork from the Colombian illustrator, and frequent New Yorker contributor, Leo Espinosa.