Twin Peaks, David Lynch’s genius exploration of American violence, weirdness, wisdom, entertainment, and character, is back, twenty-seven years after its television debut on ABC in 1990. The reboot, entitled Twin Peaks: The Return, is exclusively Lynch-directed (unlike the much-maligned second season, which, I’ll say, is stunning in its own ways), a limited series of eight episodes. It premiered this past Sunday evening on Showtime.

The show, for those who have never seen it, orbits the death of Laura Palmer, a high school student in the Pacific Northwest mill town of Twin Peaks. Palmer’s body appears in the opening moments of the series, discovered by the fisherman and lumberjack Pete Martell (played by Jack Nance) on the shore of a river.“She’s dead,” he reports to Sheriff Truman over the phone, audibly shaken, “Wrapped in plastic.”

And that’s basically it for Sheryl Lee, the actress who plays Laura Palmer. Laura will appear elsewhere in the series, in found videotapes, framed photographs, and creepy dreamscapes mostly, but her story is largely left to be sorted out by the rest of the cast: local cops and federal investigators, bonkers psychoanalysts, spurned boyfriends and lovers, rabid capitalists, and her friends. She’s silent, but her name’s on everyone’s lips.

Then: FBI shows up. Cocaine is bought and sold. Visions are had. A secret society meets. Coffee is drunk. Pie is eaten. A giant steals a ring in a dream. A one-armed man sells shoes to some cops. A bird knows a killer’s name. A gum is due back in style. Alien life sends a message to an eloquent American major. The owls are not what they seem.  A local dream pop band appears out of thin air and is stunningly good. A log speaks. “Arms bend back.” Portals open.

I could go on, but it’s abundantly clear, for Lynch, Edgar Allan Poe’s dictum—“The death of a beautiful woman is, unquestionably, the most poetical topic in the world”—is the law of the land. The death of Laura Palmer is inspiration bait, fertilizer.

That’s kind of troubling. And it’s a fact that stands out as maybe the only unintentionally troubling aspect of the series. This may be one of the reasons why Lynch, who has always seemed to me smart and sensitive, after the show’s first season, asked his daughter, Jennifer Lynch, twenty-two at the time, to write The Secret Diary of Laura Palmer, an artifact that would appear in the show’s second season. (Another reason would be: clever marketing.) 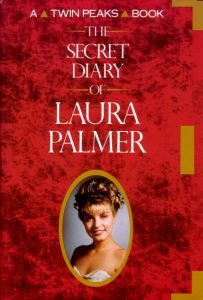 “[T]he novel,” writes Lara Williams in the Guardian, “depicts Palmer’s transition from girlhood into adolescence and offers graphic accounts of her sexual abuse by Killer BOB and her father. The book is a harrowing reminder that beneath the kitschy aesthetic, the loopy surrealism and the damn fine coffee, Twin Peaks was a show about child abuse.” She continues:

[T]he novel is surprisingly profound. It is unflinching in how it depicts a teenager’s powerlessness in the face of adult male sexuality, and how abuse shapes her burgeoning sexuality. It also contains a complex depiction of how the abuse shapes Laura’s life: her burgeoning addiction to cocaine, which she funds with sex work, the self-loathing she feels as she imagines she invited the attacks.

It’s heavy stuff. So, okay, Lynch deciding to have his own daughter inhabit Palmer’s dark world may not appear either smart or sensitive, but it does, at the very least, give Laura Palmer a say in her own story — and that»s important.