John Bolton speaking at CPAC in 2015. Photo by Gage Skidmore, via Flickr.

For the Intercept, Lee Fang zeroes in on what is perhaps the most horrifying reason why John Bolton is not right for the job of National Security Advisor, to which Donald Trump recently appointed him: his direct involvement with the self-proclaimed “international policy council”—aka fake news powerhouse—the Gatestone Institute.

The Gatestone Institute has consistently published completely false and most definitely defamatory reports concerning Muslim and migrant communities throughout the world.

According to Fang, their most notable claim—on purported “no-go zones” throughout Belgium, The Netherlands, France, Sweden, and other European states, where local immigrant communities have supposedly established vigilante justice and police are not welcome—has circulated online since 2012 and was directly, and repeatedly, discussed throughout the 2016 Republican primary, by then-candidate Ted Cruz and our current president Donald Trump.

Fang’s detailed research on Gatestone makes it clear the media company’s sole intent is to propagate fear and hatred toward Muslim groups. He writes, “The website routinely portrays Muslim migrants and refugees as an existential threat to Europe and the United States, claiming that immigrants bring ‘highly infectious diseases,’ genital mutilation practices, and terror to any nation that accepts them. The site spent years sharply criticizing the Obama administration for having a ‘traditional Muslim bias’ against Christians.”

Further teasing out connections between the Trump administration and the moneyed racists not-so-secretly controling this country, Fang also lists other notable people in the Gatestone orbit: Sears heiress Nina Rosenwald, and American heiress and Breitbart backer Rebekah Mercer, who was initially listed as joining Gatestone’s board in April 2017, but has since been removed from the company’s website. 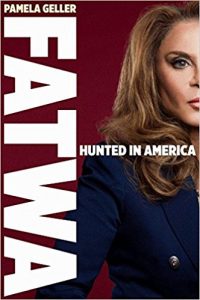 Oh yeah, not to mention Bolton’s endorsement of one of our country’s “most flamboyant anti-Muslim activists” (according to the Southern Poverty Law Center)! Fang cites reporting from The Nation’s Eli Clifton on Bolton’s connections to Pamela Geller, whose blog “Atlas Shrugs” (ugh) has been spewing anti-Muslim hate since 2004. Bolton even wrote the foreword to her most recent book, Fatwa: Hunted in America, the title apparently not intended as a joke.

Bolton has chaired the Gatestone Institute since 2013. A press release celebrating his accession to the position includes a quote from Bolton, invoking his desire to protect “the freedom-loving people” of the United States in an otherwise “dangerous world.”

Bolton’s appointment came the same day as outgoing national security advisor H.R. McMaster’s resignation. Bolton previously served as a Fox News analyst, where he was often consider a “foreign policy hawk.” Before that, he was the US ambassador to the United Nations under George W. Bush.