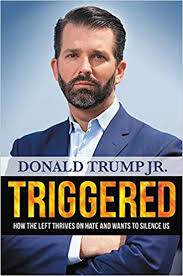 In an unsurprising move, President Trump has publicly endorsed his son’s (Donald Trump Jr.’s) new book, “a violation of ethics rules if it had come from any federal employee other than the president,” reports Jill Colvin for the Associated Press.

My son, @DonaldJTrumpJr is coming out with a new book, “Triggered: How the Left Thrives on Hate and Wants to Silence Us” – available tomorrow, November 5th! A great new book that I highly recommend for ALL to read. Go order it today!

Liz Hempowicz, the director of public policy at the Project on Government Oversight, explained to AP:

Ethics aside, the hypocrisy of promoting the book while attacking Hunter Biden for capitalizing on his father’s office, is sparking considerable criticism.

The book, unoriginally titled Triggered: How the Left Thrives on Hate and Wants to Silence Us, comes out in December but its GoodReads page is already a slew of one-star reviews combatted by comments from people who don’t know what ARCs are and argue no one could possibly have read the book yet. (What a muddled sentence. This whole story is too absurdly predictable.)

Perhaps the only surprising aspect of the story is the lack of grammatical errors in the tweet. Well, other than a missing comma and the use of an en-dash instead of an em-dash, but are, I suppose, forgivable.