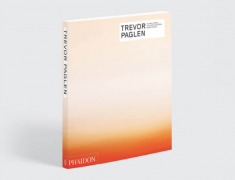 This past March, a large black flag was raised over the Manhattan HQ of the public arts institution Creative Time. Fluttering in the wind, one might have caught sight of the emblem printed on the center: a weeping angel surrounded by a message encrypted in an alphanumeric code. This rather imposing ensign was part of “Pledges of Allegiance,” an ongoing project by Creative Time in which sixteen artists in as many months hoist flags of civil resistance over, yes, sixteen art institutions across the US. What’s the significance of sixteen? For the answer to that you’ll have to reach out to Creative Time. On the other hand, if you want to know what message is encrypted in the aforementioned code: you’ll have to ask its designer: the artist, writer, MacArthur “genius,” and Melville House author Trevor Paglen.

Now Paglen is reaching another career milestone: his first Phaidon monograph. Edited by art scholars and curators Lauren Cornell, Julia Bryan-Wilson, and Omar Kholeif, this expensive and opulent book will feature hi-resolution, large-scale images of Paglen’s work, smart-sounding essays, notes from the editors, and a comprehensive history of Paglen’s projects, nearly all of them exposing surveillance — one of the main things Paglen has documented over his three-decade career. For those interested, the book launch happens on May 5 at the Museum of Modern Art in New York.

Paglen’s work as an investigative artist, one interested in using art as a vessel for reportage and exposure, is multifarious. You can find his high-def photographs of secret military installations in renowned museums, and watch his video work in the Edward Snowden documentary Citizenfour. Bryan-Wilson puts it best when she says, “Though he is best known as a photographer, Paglen’s work is nimbly cross-disciplinary. Indeed, much of his work tests the limits of conventions around medium; he blurs the boundaries between artistic disciplines as he also crosses the thresholds between art, science, research and activism.”

Especially notable is Paglen’s fascination with the US government’s furtive iconography around its classified military and intelligence projects — something Paglen is especially adept at revealing. One of his books with us, I Could Tell You But Then You Would Have to Be Destroyed By Me, gathers military patches issued by the Pentagon for its top secret military projects. As the title and some of the patches (a smiley face with a zipper for a mouth; a mushroom cloud labeled “Semper in Obscurus”) indicate, the military seems to relish its classified operations enough to display them.

What is interesting about the “Weeping Angel” is that Paglen has more or less created his own “patch” for real CIA skullduggery — in this case a hacking tool that, according to Wikileaks, was installed by the CIA in various models of Samsung digital televisions. By secretly turning on and into a sort of “record mode,” the televisions allowed for intelligence agents to listen in on the conversation of anyone in the proximity of these modified sets.

Oh, and that code? It turns out that Creative Time put together a video giving away the answer for those trying to solve it. Watch it at your own risk.