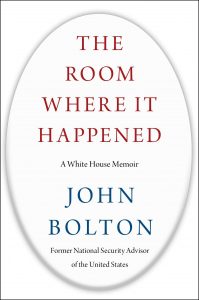 The political-insider book is hardly a new phenomenon—Tacitus’s Annals, which was named one of the ten best nonfiction books of 117 (AD) by The New York Times, is an early example of the genre—but the trend has taken on sinister aspects in recent years. In a smart and cutting essay in Vox, of all places, editor and journalist Maris Kreizman decries the recent practice of handing out massive advances to former administration officials for books that contain information that is pertinent to impeachment—or prosecution. Kreizman writes,

It’s nothing less than Trumpian that Trump’s colleagues only speak out against him when money is on the table and not just because they feel morally compelled to do what is right. This kind of greed should not be mistaken for bravery, not while the country and its most vulnerable people continue to be degraded by this administration.

Hear, hear, we say. We have already, in these pages, expressed our disgust with the anonymous publication of A Warning and with moustachi0ed former national security director John Bolton’s tell-all. With regards to Mr. Bolton and his moustaches, we denizens of John Street are no fans of the police, but … somebody slap a subpoena on that man, stat! Why should he be allowed to sell evidence pertaining to the trial of the president—evidence accrued while working on the taxpayer’s dime, no less—for his private profit? It’s an outrage!

And our peers in the book biz are culpable in this as well. “It’s particularly demoralizing,” Kreizman writes, “to watch publishers package the ongoing debasement of our country as entertainment.” Well, at the risk of coming across as more-righteous-than-thou, we here on John Street have got different ideas. We are proud to publish books that we think matter, dammit … and if you, like Ms. Kreizman, and like us, to be frank, are tired of this seamy state of affairs, please look over what we have to offer. It ain’t over yet!