Too little too late — indie bookshops get snubbed again, this time over Philip Pullman signed editions Philip Pullman’s long-awaited La Belle Sauvage, the first in his new Book of Dust trilogy (prequels to His Dark Materials), is selling like proverbial hotcakes.

Back in July we wrote about the concern and anger independent bookshops were expressing over the heavy discounting going on at big chain bookshops and supermarkets. These larger retailers had in many cases invited readers to pre-order their copies at half the recommended retail price, a deal indies couldn’t afford to match. Now the book is officially out — and the backlash continues.

Last month, the UK’s biggest bookshop chain, Waterstones, received 5,000 signed copies of La Belle Sauvage. Exclusively. Meaning they were the only ones in the country to stock this special edition. And they could sell it at full price because, well, fans really really wanted one. In response, a cutting post emerged from the Secret Bookseller, a UK blog written by an anonymous indie bookseller. She quipped:

I can only congratulate Waterstones for pulling off a business masterstroke here that I think most drug cartels would be enormously proud of… Jesse and Walt, eat your heart out.

This example shows us how the Publishing Industry tends to operate in 2017, with everything fixed in favour of Waterstones.

While Waterstones are raking in the cash, what are our friendly (and increasingly ignored and angry) local bookshops left with? The crumbs, apparently — the crumbs in this case amounting to 5,000 signed book plates, to be distributed to independents around the UK in early December. Book plates are ok, but they are not signed copies. They are stickers the author signs, which get inserted into the front of books. Richard Drake from The Bookshop in Stockton-on-Tees told Heloise Wood at The Bookseller: 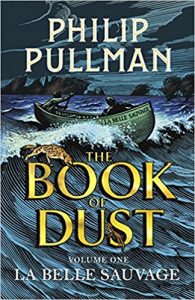 Bookshops who receive the book plates will also get an exclusively produced print by Chris Wormell — he illustrated the cover of the UK edition. The prints depict Lord Asriel, his daemon Stelmaria, and Lyra as a baby and each will be mounted and presented in a gold envelope. Tim West, co-owner of the Big Green Bookshop in London, told Wood:

“I don’t begrudge Pullman or the publishers their marketing campaign but this story is just another part of this campaign. I wouldn’t go out of my way to order the book plates or prints. A signed copy has much more significance if you have stood in front of the author and said ‘will you sign my book’. I’ve had signed prints before which people haven’t been interested in.”

Let’s not be totally ungrateful here, it is a good thing that Penguin Random House Children’s and David Fickling Books have done something for indie bookshops. But it’s only after the indies started frantically waving their hands in the air, desperately trying to get noticed that the publishers woke up, realising if they didn’t respond in some way they’d look like the bad guys. It feels like too little, too late. As the Secret Bookseller writes:

By the time Indie Bookshops receive the bookplates and prints, La Belle Sauvage will have been released for roughly six weeks, so of course, our first six weeks of valued customers will have missed out completely. Certainly they can bring their copies back to the shop (if they find out about the bookplates that is, and while stocks last) and we can add the bookplate to their book retrospectively, but then I guess there is nothing to stop customers that have bought the book from other shops (or indeed on-line) doing this too…. How different it all could have been if the bookplates and prints had been provided to Indie Bookshops pre-publication, with us all having a chance to use them in our initial publicity.

But then, no-one was really thinking about us or making “special plans” for us back then, were they??

The book trade—publishing and bookselling—is a business, and business decisions need to be made. But when a chain like Waterstones controls so much of the market, one feels choice is being removed. As the Secret Bookseller highlights, there are 900 indie shops in the UK to around 300 Waterstones shops — but Waterstones wields greater influence. The Secret Bookseller writes: I don’t believe that publishers really want to get on the wrong side of Waterstones. They are very reliant on them both for sales and author events.

Any publisher who provides Indie Bookshops with quality limited editions or a headstart on a major book release runs the risk of incurring the wrath of Waterstones.

This could then impact on future sales, promotions or events with them.

I am happy to be proved wrong.

Sadly, from experience, I can’t help to prove this wrong. In fact I think it hits the nail right on the head.

Pullman has been vocal in wanting to support independent bookshops.  He is the president of the Society of Authors, who launched a campaign back in July calling for publishers to stop discounting heavily on bulk sales deals, as these damage author earnings.  He said to Alison Flood at the Guardian:

“At the moment, the situation with discounting online, in supermarkets and book chains is absurdly unfair. The classic example was the final Harry Potter — a book, if there ever was one, that would have sold to everyone for full price, and which everyone discounted so much that enormous amounts of money must have been lost to the trade.”

Pot, meet kettle. The way Pullman’s own book has been sold leaves his well-meaning remarks sound rather hollow. His UK children’s publisher, David Fickling, is an independent (previously an imprint of Scholastic, then of Random House). They proclaim on their website, “Independence will give us the autonomy to follow our instincts and back our own judgments.” Yet they seem to have used their autonomy to fall in line behind Waterstones. If this pairing of an outspokenly indie-friendly author and a proud indie publisher fails to support indie bookshops, it feels like all hope is lost.

When I last toured indie bookshops two years ago, there was ebullience at the peaking of Kindle sales and popular revulsion at Amazon’s tax arrangements. But no conventional economist could grasp how 900 indies are still in business. They are, because so much bookselling is done out of love. That’s wonderful, but the rest of us—and publishers producing special editions—must love them back.