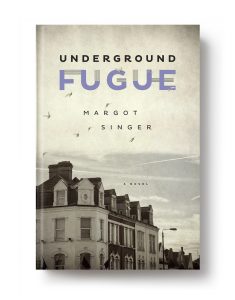 Be full of surreptitious joy: today, with furious enthusaism, we release the paperback of Margot Singer’s debut novel, Underground Fugue.

When we first published the hardcover last spring, the response was swift and huge. At the Washington Post, Ron Charles wrote, “Singer’s novel travels up and down the scale of sorrow, reflecting the musical and psychological connotations of her title… This haunting story… feels suspended in a murky state between memory and presence, happiness and despair.” Publishers Weekly called it “an unusually layered debut” with “strands [that] converge brilliantly.” The New York Times Book Review praised the characters’ “depth and richness.” And, oh yeah, it won Margot an Edward Lewis Wallant Award. Nice.

The action of the book revolves around Esther, who leaves New York after losing a son and ending a marriage, and comes to London to care for her dying mother. Already adjusting to another country and an emotionally fraught situation, she gets to know her new neighbors, an Iranian émigré doctor named Javad and his moody teenage son Amir. Just as they’re becoming more familiar, the 7/7 attacks explode on the London Tube, and everything becomes more complicated.

To make sure you’re appropriately excited, here’s an early excerpt from the book. Esther has just awakened in the middle of her first night at her mother’s house, and steps outside for a smoke…

Underground Fugue is out now in paperback.
Buy your copy here,
or at your neighborhood
independent bookstore.