Last week, when we checked in with the academic Timothy Snyder, there was a whole lot of hoopla flying around about his new book On Tyranny. That story had everything: a mysterious Amazon UK book page, a fictional adult coloring book, FX’s hit television series The Americans, the political philosopher Leo Strauss — and a heavy dose of McCarthy-era-quality Red Scare Juice (from concentrate) in the form of that catch-all villain of the Trump era: the Russian Hacker. All of this is to say, read that very interesting story, and meet me back here in five.

Okay, okay. Hey, is this a secure line? Good.

So, this story doesn’t have all that, but it does feature On Tyranny, that latest book from Timothy Snyder, and some pretty savvy marketing from its UK publisher, Vintage. As The Guardian’s Danuta Kean reports, the complete text of the book, all one hundred thirty pages worth of it, will be posted along a popular east London street as a series of twenty posters designed by Vintage creative director Suzanne Dean, her team, and students at Kingston University. Visually, the posters recall the iconic propaganda posters of the 1930s. 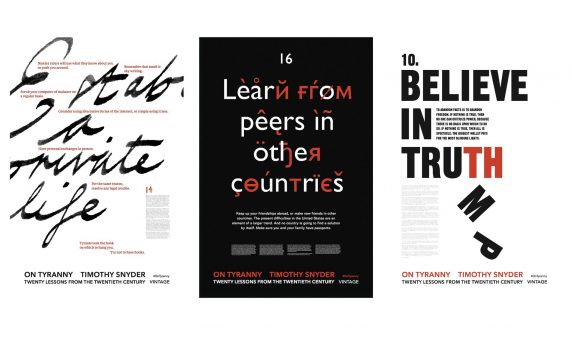 Snyder’s book has been described as a “manifesto and manual” and a “practical guide to resisting the rise of totalitarianism.” Its message, then, belongs to the public, is a public good. Snyder and his publisher both get that, though Snyder admits it took him a moment to understand and appreciate the campaign:

“Any publication means the transformation of ideas into an object,” [Snyder] explained. Describing the posters as “in effect a second kind of publication of the book” and its transformation from 20 lessons about tyranny into 20 original pieces of art, he said: “I didn’t grasp that until I saw the wonderful posters. This is not so much the promotion of the book as another realisation of it, free of charge in the public space.”

“I will be more than happy if the posters themselves convey [the book’s] message. We have become unused to the stakes being high, but they are: those who control the executive branch of the US government want a regime change in my country, and the basic sense of freedom that many of us have come to take for granted in the west is under threat.”

Check out more of the posters at the Guardian.