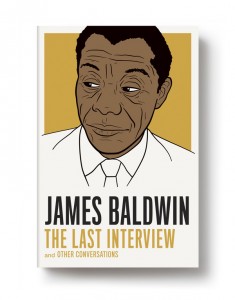 So, we have kind of a thing for James Baldwin.

Eloquent and elegant, trenchant and timely, Baldwin’s writing seems, somehow, to have grown only more relevant in the thirty years since his death. Certainly right now, with a gang of thugs pandering to white nationalists from the White House, and threats against LGBTQ folks that had been pushed to the margins marching back toward the center, Baldwin’s singular voice feels more relevant than ever.

Here are just a (very) few of the (very) amazing things Baldwin has to say in the book:

I think Americans are terrified of feeling anything. And homophobia is simply an extreme example of the American terror that’s concerned with growing up. I never met a more infantile people in my life.

Her gift is in allegory…. I think that Toni’s very painful to read…. Because it’s always or most times a horrifying allegory; but you recognize that it works. But you don’t really want to march through it. Sometimes people have a lot against Toni, but she’s got the most believing story of everybody — this rather elegant matron, whose intentions really are serious and, according to some people, lethal.

Don’t miss this. Supplies are not actually limited, but you should, nonetheless, act now. As is the case with some other things, tomorrow’ll be too late.

Today and Monday, MobyLives is on semi-hiatus — we’ll be posting some good stuff, but our regular writers have the days off. Don’t worry, though — we still love you, and will resume our usual activities on Tuesday.