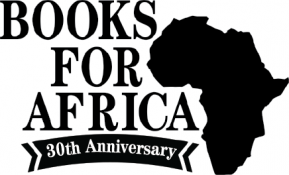 Thirty years ago, retired book publisher Tom Warth founded Books for Africa, a charitable organization on a mission to end “book famine” in the world’s second-largest, and third-most-populous continent. He had just finished visiting an acquaintance in Jinja, Uganda, on the banks of Lake Victoria, where he visited a library, and found himself deeply moved by the almost complete absence of books. As soon as he arrived home he started rounding up members of the Minnesota Book Publishers’ Roundtable, sharing his story, and gathering commitments from publishers, booksellers, and librarians.

This year, on June 9th, Books for Africa will send a shipment of books to the Central African Republic, at which point they will have sent more than 41 million books to every country on the continent. In honor of the anniversary, and the milestone, they’ll be throwing a big ol’ party at their warehouse and shipping hub in Atlanta, Georgia.

In the press release announcing the event, Warth celebrated his organization’s past achievements, while emphasizing that there was much work still to do. “There are 450 million children in Africa,” he notes, “and a total population of nearly 1 billion so there is still a need for more books.”

It is hard to overstate the crucial importance of access to written educational materials, and, as Shannon Prather points out in the Minnesota Star Tribune, the quality of education for African children, formal or otherwise, has global implications. Prather writes, “Half the world’s population younger than age 18 will be in Africa by the end of the 21st century, according to a UNICEF study.”