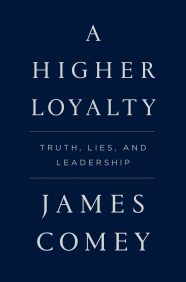 There are few joys greater than sticking it to someone who’s wronged you. Payback, comeuppance, karma—call it what you want—is freaking amazing. We’re coming up on six months since the firing of James Comey, and things are getting passive aggressive in the ol’ retaliation zone.

Let’s start by remembering the strage days of Comey’s testimony to the Senate Intelligence Committee.

REED: Now, again, also, you’ve testified that the president asked you repeatedly to be loyal to him. And you responded you’d be honestly loyal. Which is your way of saying I’ll be honest and I’ll be ahead of the FBI independent, is that fair?

COMEY: Correct. I tried honest first. And also, you see it in my testimony. I also tried to explain to him why it’s in his interest and every president’s interest for the FBI to be apart, in a way, because its credibility is important to a president and total country. And so, I tried to hold the line. Hold the line. It got very awkward. And then I said you’ll always have honesty from me. He said honest loyalty. And I then I proceeded with that as I saw that as a way to end this awkwardness.

When we reported in July on Comey’s quest for a publisher, it was unclear how salacious details like these would be fleshed out. But now that pre-orders have gone live for Comey’s book, due out in May from Macmillan via their Flatiron Books imprint, we’re getting some insight.

The book’s title, A Higher Loyalty: Truth, Lies, and Leadership, seems an attempt to troll the president over his ludicrous demands in the “loyalty” incident. As CNN’s Aaron Smith notes, “‘Loyalty’ is a key word for Comey… Comey testified that after his firing Trump attempted to defame him and the FBI.” It now appears Comey is trying to do the same back to Trump.

Comey has enjoyed a vibrant career over two decades of public service, but his life of late has taken a plebeian turn. Although he’s been mostly keeping private, Emily Tillet of CBS News points out, “He has, however, reappeared on social media, tweeting under the monicker ‘Reinhold Niebuhr,’ which appears to be a reference to the theologist who was prominent from the early to mid 20th century.” While much of his social media use involves sharing favorite quotations and aphorisms, there are occasional intimate moments, such as Comey in a cornfield at sunset, and humor, like his response to the publication of his book: “Lordy I hope there are pictures.”