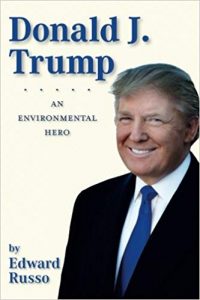 Lest we begin to doubt the impact that books can have on the culture, in a backwards and entirely upsetting way, Donald Trump has reaffirmed the power of the written word.

Trump recently cited a self-published volume by one Edward Russo, entitled “Donald J. Trump: An Environmental Hero,” while arguing that the environment was “very important” to him, and he was what some (meaning the book’s author) were calling an “environmentalist.”

This prompted the Guardian to write that “Donald Trump is going to acquire a book,” which, in book publisher speak, sounded like it was saying Trump was going to edit and publish it—which elicited a cold sweat in your faithful blogger.

No need for alarm, however. We are (so far) spared a dedicated Trump Books imprint. The Guardian was merely trying to telegraph their skepticism that the president was going to read or otherwise handle a book. As they point out, his ghost-writer for “The Art of the Deal” famously noted that Trump “doesn’t read books.”

Despite this, Trump is dauntless as usual in his zeal to roll back several facts of public and common knowledge. Not only does he like books, and read them, but he never said that climate change was a “hoax,” stating, “Nothing’s a hoax about that. It’s a very serious subject.”

Five grafs in, and this is too depressing to continue… The point here is not that Donald Trump lies a lot, but that he is using an independently published book to somehow lay credence to his (blatantly ridiculous) claim.

Books sound authoritative, don’t they! Probably even more so when they don’t have the above cover and weren’t written by a man who “acted as an environmental consultant for Donald J. Trump and the Trump Organization for fifteen years.” But in much less ridiculous cases than this one, there is a question hanging over the publishing industry about how authoritative books should be and to what degree they are invested with a duty to some sort of truth.

Jill Abramson published “Merchants of Truth” sometime last year, which ignited a small firestorm on Twitter over accusations of plagiarism and inaccuracies in the galley. The paradox that animated the scuffle seemed to be that books, although they seemed invested with some sort of authority due to their format, were in fact much less closely checked than newspaper and magazine articles.

And while all publishers would like to jealously guard some sort of mythic primacy to books—the written word! bound! on! paper!—there is ample danger in investing any object with authority based purely on its medium. And there’s always somebody ready to abuse it.

The only question is, if we really let go of the printed-and-bound chauvinism, how do we still manage to feel special…? We do need some concessions in the ever-present pressures and indignities of publishing the age of Amazon…