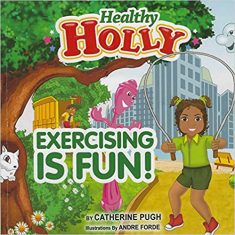 What’s with the pink, Gumby lamp post. Will we ever know?

We are living in something of a golden age of fraud. It seems in the past four years, we’ve become acquainted with every permutation of misdeed involving a country in the former Eastern Bloc. It’s maybe even a little boring. Let’s have a new form of fraud, for Christ’s sake!

This is why we’re so thrilled to bring to you today a misdeed by a public servant that actually doesn’t involve Russia or Ukraine. In a fresh new angle, I present to you: children’s books!

According to NPR, Former Baltimore Mayor Catherine Pugh is the author of a series of children’s books called Healthy Holly, which feature (you guessed it) a healthy little girl named Holly. The recently unsealed indictment reveals that she sold hundreds of thousands of dollars’ in Healthy Holly books to a nonprofit whose board she had previously been on, and then failed to ever deliver the books.

In fact, it appears that nobody has ever actually seen a Healthy Holly book and sounds suspiciously like they don’t even exist. That said, there is an Amazon page up which features a cover design, and one copy is available used for $199.99. (I cannot possibly be the only one who is tempted to click the button and see if anything comes in the mail. Perhaps this could turn into MobyLives deep-dive series, or maybe … a podcast? Gimlet, call me.)

Anyhow, Pugh was able to collect payments for the books which she used in some part on a house and also [drumroll] ON HER POLITICAL CAMPAIGN. Ah, all indicted alleged fraudsters seem to think alike, don’t they!

She now stands accused of multiple counts of wire fraud, conspiracy to defraud the United States, and tax evasion.

NPR emphasized that this undermines people’s faith in public servants:

“Fraud and corruption of the sort we are addressing today undermine the public’s faith in public officials,” Robert Hur, U.S. attorney for the District of Maryland, told reporters Wednesday in Baltimore. “This is a tragedy and the last thing that our city needs.”

I get it, but come now … I think there might be other things going on that might be undermining the public’s faith in public servants on something of a more seismic level, right?

Anyhow, the publishing professional angle on this is that these highly lucrative children’s books appear to never have been written and published, so what we’re hearing is there is still space in the market for these inspired works about “a young black girl who touts the benefits of nutrition and exercise.” Genius. Children’s book writers, call me.